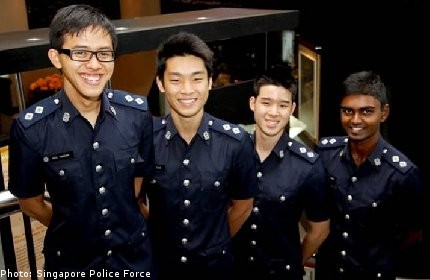 The Singapore Police Force Overseas Scholarship (SPFOS) has been awarded to four candidates this year.

The prestigious scholarship, awarded by the Public Service Commission, is typically given to candidates who have outstanding academic performance and leadership qualities, and are keen to serve in the Singapore Police Force.

SPF Overseas Scholars are sent to renowned institutions all over the world such as those in the United Kingdom and United States for their undergraduate studies. This scholarship grooms and develops bright and motivated young individuals for leadership positions within and beyond the SPF.

Mr Adil Hakeem studied at Guangyang Primary School, Rosyth School, and Raffles Institution under the Integrated Programme. He has left in mid August 2013 to read Ethics, Politics and Economics at Yale University, US. He was also awarded the President's Scholarship in 2012.

Mr Joshua Jesudason studied at Fairfield Methodist (Primary), Fairfield Methodist (Secondary), and Anglo-Chinese Junior College. He will leave in September 2013 to read History and Politics at the University of Oxford, United Kingdom. He is also awarded the President's Scholarship this year.

Mr Timothy Yap studied at Kuo Chuan Presbyterian Primary School, and Hwa Chong Institution under the Integrated Programme. He will leave in September 2013 to read Law at the University of Oxford, United Kingdom. He is also awarded the President's Scholarship this year.

Mr Teo Chee Hean, Deputy Prime Minister, Coordinating Minister for National Security and Minister for Home Affairs, presented the scholarships at an award ceremony at the Istana on 22 August 2013. As Mr Adil Hakeem has left in mid August for his studies, his parents received the award from Mr Teo on his behalf. Upon completion of their studies, the scholarship recipients will undergo training at the SPF Training Command. Upon completion of training, they will be posted to the land divisions to assume investigation and command appointments.

In addition, this year marks the 35th Anniversary of the SPFOS, and a celebration was held in conjunction with the Presentation Ceremony.

The SPF Overseas Scholarship was first awarded in 1979. Since its inception, the scholarship has been awarded to more than 60 individuals.

Some notable SPFOS alumni include:

b) Mr Heng Chee How (Senior Minister of State, PMO)