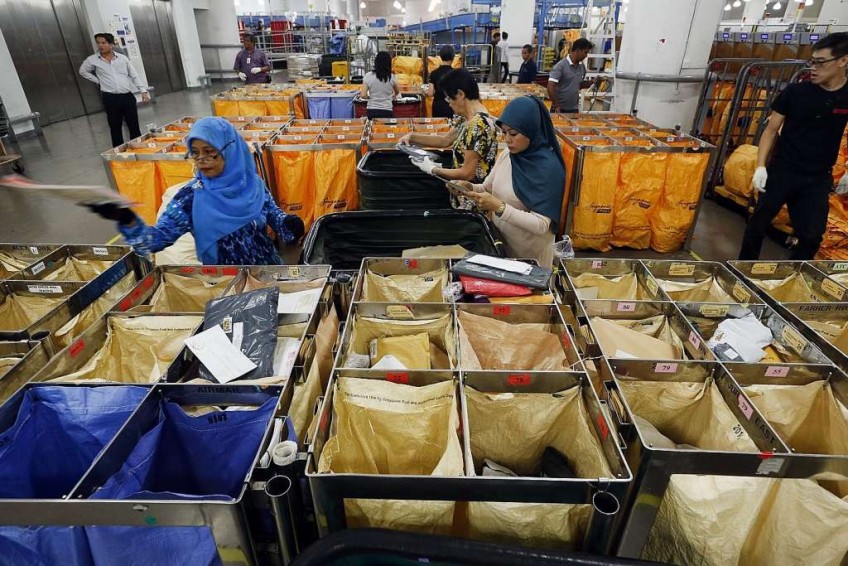 The number of postal articles cleared annually in Singapore spiked by over 40 per cent from 2014 to last year, making it tougher for the authorities to detect contraband items like drugs and cigarettes.

But the Immigration and Checkpoints Authority (ICA) said its officers, who check all items such as parcels and packages from overseas before they reach their intended local recipients, are well trained to handle the increased workload.

The ICA said it cleared more than 5.16 million postal articles at its Parcel Post Section inside the mail processing centre at the Singapore Post (SingPost) headquarters in Paya Lebar.

In the first six months of last year, the ICA detected more than 7,000 cases of contraband in postal articles. In 2015, 18,419 cases were detected, which means that one in every 262 parcels contained contraband items.

The detection rate was lower than in 2014 when officers uncovered 14,289 cases, which means one in every 255 parcels contained contraband items.

During a visit by several media outlets to the SingPost mail processing centre yesterday, Superintendent Lua Yik Choon from the ICA said his officers are trained to look out for packages bearing telltale signs that they might contain illegal items.

But Supt Lua, 50, who is the Senior Assistant Commander (Ground Operations) of ICA's Air Cargo Command, declined to reveal what these indicators were.

He said: "Smugglers always try to find new ways to hide them and through training, we are able to stay one step ahead of them.

"We also make use of technology like X-ray machines to detect contraband items."

The Central Narcotics Bureau (CNB) revealed last month that it also works with ICA and SingPost to share information and conduct joint training to tackle the problem of online drug peddling.

Stressing that the number of people arrested for buying drugs and drug-related paraphernalia online has increased significantly from 30 in 2015 to 201 last year, the CNB added: "This trend could also be attributed to the ease and comfort of people purchasing things online."

A team of ICA officers inspect packages in the 156,000 sq ft SingPost mail processing centre between 8am and 4.30pm every day. The centre is bigger than the size of two football fields.

With the use of equipment like X-ray machines, they take turns to scrutinise the packages for contraband items.

Due to the tiring nature of their work, they can inspect the packages for only up to 30 minutes at any one time before another officer takes over.

Whenever an officer suspects that a package contains illegal items, he would open it in the presence of a SingPost officer to doublecheck.

During the visit yesterday, The Straits Times saw officers opening one parcel after an X-ray machine showed that it contained some pills, which turned out to be vitamin tablets, not illegal drugs.

CI1 Tan, 38, who is an Assistant Team Leader of the Parcel Post Section, from the Air Cargo Command, added: "In 2014, we detected some ketamine and Ecstasy pills hidden inside a case that looked like a hollowed-out book.

"We immediately referred the case to the CNB."