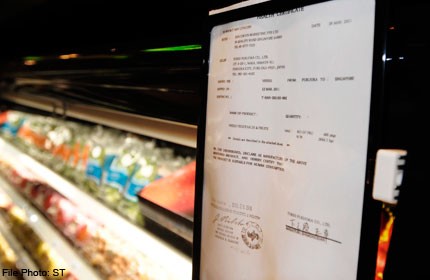 A company director was on Wednesday fined $48,000 for counterfeiting documents to export the firm’s goods.

The fake Certificates of Origin helped goods from Fukutomi Technologies, worth $300,000, to gain easier access to importing countries, said Singapore Customs in a statement on Friday.

Toh, who pleaded guilty to four charges, is the first to be prosecuted for the offence. Nine other charges were taken into consideration.

His actions, which were committed over a 27-month period from November 2008 to February 2011, flouted the Regulation of Imports and Exports Regulations. They undermined the reputation of such certificates issued here and Singapore’s reputation as a trusted global trade hub, said Singapore Customs.

Certificates of Origin are used by exporters to certify the country of origin of their goods. Five organisations here, including Singapore Customs and the Singapore Manufacturing Federation, are authorised to issue them.