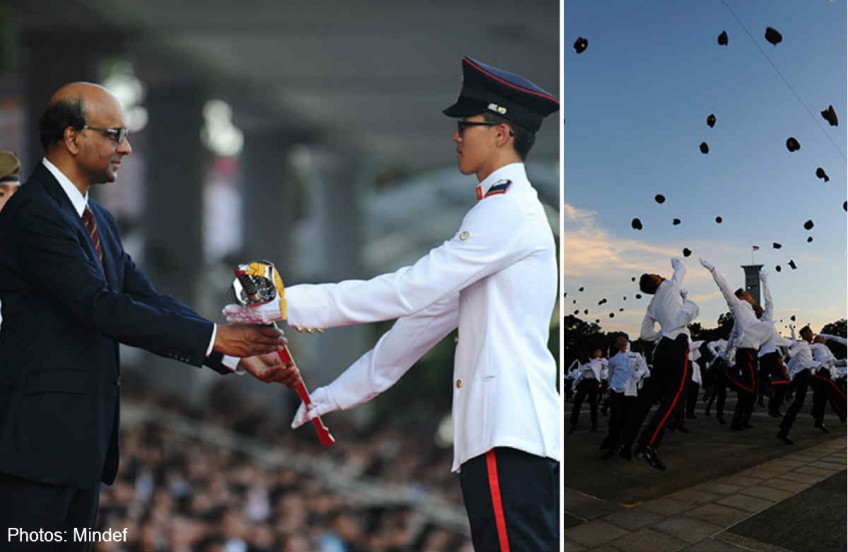 SINGAPORE - A total of 553 cadets were commissioned as officers of the Singapore Armed Forces (SAF) on Sunday.

Speaking at the parade, Mr Tharman highlighted that the security landscape has become increasingly complex in recent years due to tensions in the region and transnational security challenges such as terrorism, natural disasters, biological pandemics and cyber threats.

He said: "As the ultimate guarantor of Singapore's security, the SAF must remain a strong and credible force against all security threats, to give Singapore and Singaporeans the confidence to face a volatile and uncertain world."

Mr Tharman reminded the graduands that while the SAF invests in state-of-the-art platforms and weapon systems to keep the technological edge of our defence sharp, it also contributed to a wide spectrum of operations including reconstruction efforts in Afghanistan and the international counter-piracy operations off the Gulf of Aden.

Nevertheless, it is the people who make the difference. "National servicemen, like yourselves, are the cornerstone of Singapore's defence," he said.

The parade marked the completion of 38 weeks of rigorous training at the Officer Cadet School. The realistic training conducted during the course sharpened the cadets' combat, planning and leadership skills.

The newly commissioned officers will go on to assume command, instructional or staff appointments in the SAF. Present at the parade were Members of Parliament, senior SAF officers and Ministry of Defence officials, as well as families and friends of the graduands.