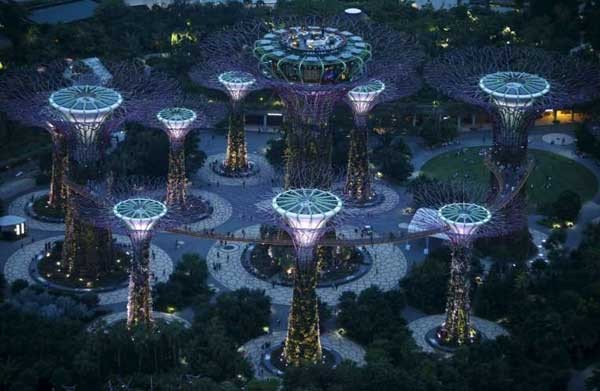 SINGAPORE - Six landmarks around Singapore will be among the 200 or so icons across the world to be lit up in blue on Saturday night to commemorate United Nations (UN) Day.

From 6.45pm till midnight, the roof of Changi Airport Terminal 1, the Esplanade, the bandstand at Singapore Botanic Gardens, the facade of the new National Gallery, the Singapore Art Museum and the Supertrees at Gardens by the Bay will be taking on the official colour of the UN to mark its 70th anniversary.

The Ministry of Foreign Affairs chose these landmarks for their iconic status and historical significance. The Singapore Botanic Gardens, for example, was declared a Unesco World Heritage Site in July this year.

Changi Airport Group's senior vice president of corporate and marketing communications Ivan Tan also said in a statement: "Travel promotes a better understanding of our different cultures and builds stronger ties between people from all corners. We are pleased to join in the #UN70 celebrations by turning the roof-top lantern of our Terminal 1 blue."

Around the world, over 60 countries will turn their landmarks blue at nightfall in their respective time zones. Singapore will be one of the earliest to do so.

Landmarks in other countries that will be lit up include:

- the Great Pyramids of Giza in Giza, Egypt

- Etihad Towers in the UAE-Abu Dhabi, and

Tomorrow is United Nations Day. To celebrate the 70th anniversary of the UN, iconic landmarks across the globe will be...