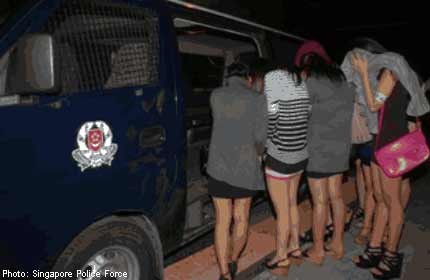 SINGAPORE - Police have arrested 68 people after a six-hour operation at businesses which were suspected of conducting vice activities.

On Aug 13 to 14, officers from the Criminal Investigation Department (CID) and Tanglin Police Division mounted a six-hour operation at nine public entertainment outlets and an office in the vicinity of Orchard Road.

Preliminary investigations revealed that the 53 women, who were employed by the public entertainment outlets, were suspected to be offering sexual services to patrons.

The earnings from the transactions would profit these outlets, which are believed to be managed by the 15 remaining subjects.

Business records, several computers and cash amounting to more than $17,000 in Singapore and foreign currencies were seized as exhibits.

If found guilty for the offence under the provisions of the Women's Charter, Chapter 353, they will be liable to a fine of up to $10,000, or a jail term up to five years, or both.

Any male person who is convicted of a second or subsequent offence under this provision shall, in addition to any jail term imposed in respect of such offence, be liable to caning.