McDonald's on April 19 announced that all its branches here would be closed from 11am that day till May 4, 2020.

SINGAPORE - The seven McDonald's staff infected with Covid-19 had been deployed across nine different outlets as of noon last Saturday (April 18), the Ministry of Health (MOH) said on Monday.

This spurred the ministry to advise the fast-food giant to stop its operations until May 4 at its more than 135 outlets, including its takeaway and delivery services, which it did so the next day.

"As of 12pm, April 18, 2020, seven McDonald's employees who had worked across nine different outlets have been found to have Covid-19 infection," an MOH spokesman told ST.

"As a preventative action to prevent a possible outbreak, and to prevent or reduce the spread of Covid-19, the Director of Medical Services, Ministry of Health, has directed McDonald's to suspend operations of all outlets, including their delivery and drive-through services, until 3 May 2020 (inclusive)."

The Straits Times has contacted McDonald's for comment about where these nine outlets were, what kind of roles these seven staff had and why they had been moving across different outlets.

Earlier on Monday, a McDonald's spokesman told ST that following the confirmation of the first few Covid-19 cases among its staff, it stopped all people movement with what it called a "'stay in position' principle".

The spokesman did not specify when this took place.

He added that in the course of normal operations, it is necessary for McDonald's to sometimes deploy employees to other restaurants to provide support. 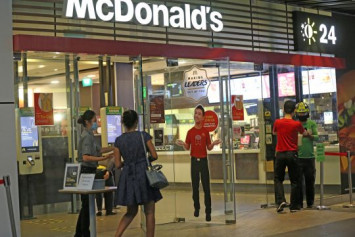 On Sunday, McDonald's announced that all its branches here would be closed at 11am that day, and will remain closed till May 4, as a preventive measure to curb the spread of Covid-19.

McDonald's told ST on Sunday that its outlets at Changi Airport Terminal 3 and a drive-through outlet at a Shell petrol kiosk in Tampines Avenue 2 were to be closed for deep-cleaning after two employees tested positive for Covid-19.

This comes after five other employees were diagnosed with the disease on April 12. They worked at outlets in Lido, Forum Galleria, Parklane and Geylang East Central.

This means that there are still three outlets that the staff members who got Covid-19 had worked at that remain unknown.

McDonald's employs more than 10,000 people in Singapore and serves more than six million customers every month.

It has said that it will continue to pay the salaries of all employees whose roles are disrupted.

When asked what will be done about McDonald's stock of food, its spokesman said that all perishables with a short shelf life will be discarded.

He also said that McDonald's acted as soon as it was advised by MOH to suspend its operations, but did not specify when this took place.