9 months on, she still has nightmares 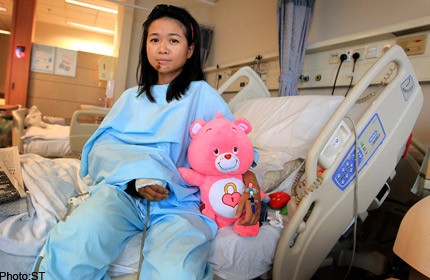 Nine months after her motorcycle was sideswiped by a lorry, she still has nightmares about being in an operating theatre.

Ms Ng Boey Ling, 27, had to undergo skin grafts to repair damaged skin caused by the accident. She gets frightened when vehicles pass by.

The lorry driver who knocked her down on Jan 18 was jailed for seven weeks on Friday.

On that day, Ms Ng, a student teacher at the National Institute of Education (NIE), was riding her motorcycle on the centre lane of the three-lane Pan-Island Expressway towards Changi Airport. In her victim impact statement, she said she was going to the Royal Sporting House at MacPherson Road for a meeting at 1.35pm.

Goh Hwee Tiong, 52, was driving his lorry behind her. A district court heard that Goh followed Ms Ng, who was a probationary rider, for about 30 seconds before he started to overtake her. Without turning on his left signal light, Goh filtered his lorry to the left and sideswiped Ms Ng's bike. Ms Ng fell onto the road and rolled a few times.

The collision was captured by the in-vehicle camera of a motorist behind them and the footage went viral.

According to court documents, Goh, a former carpenter, was aware of the close distance between his lorry and Ms Ng's bike and the risk he was taking.

On Friday, Goh was jailed seven weeks and disqualified from driving for five years.

He could have been jailed for up to four years and/or fined up to $10,000 for causing grievous hurt by a rash act. Ms Ng suffered injuries, including a fractured shoulder and abrasions, and she went through four operations and at least two skin grafts as a result.

She was warded at Tan Tock Seng Hospital for almost a month. In her statement, she said she was upset over the long hospital stay as she could not exercise nor coach.

She liked kayaking and rock climbing and had also coached kayaking at the Singapore Canoe Federation for about a year before the accident. She said she was told sometime only in August or last month that her shoulder fracture had completely healed, but the skin grafts meant that she still could not be physically active.

After her discharge, she could not sleep well and would dream that she was in the operating theatre. She sought psychiatric help, but it did not help, she said.

Ms Ng feels uptight when any vehicle goes past her. She said she had also been affected financially because of the accident.

Ms Ng, who is studying for a diploma in physical education at NIE, said that her monthly allowance of $2,050 given by the Ministry of Education had been stopped as she is on hospitalisation leave for a year.

She also lost the earnings from her coaching sessions. Although Ms Ng is the youngest in the family, she said she had to bear the burden of supporting her family with her sister as their 54-year-old mother is no longer working.

Now, her sister has to bear the burden alone, she said. Goh, now unemployed, recently apologised to Ms Ng in a letter. Ms Ng said: "I am willing to accept the apology and forgive him, but it will take time for me to forget about the incident."