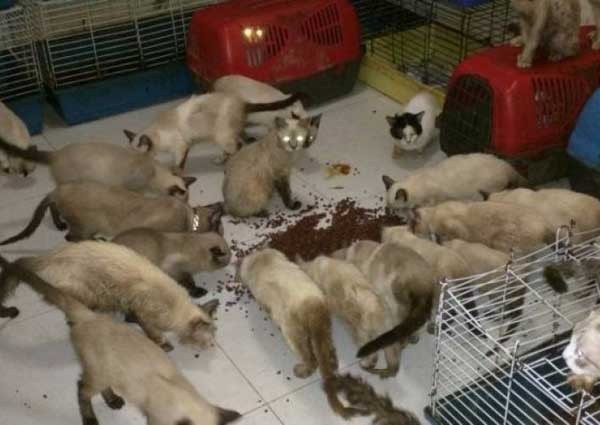 Ninety-four cats and kittens were rescued by the Cat Welfare Society from dire conditions in a three-room flat at Fernvale Link in Sengkang on Jun 26.

A Facebook page set up for the cats called Saving the Siameses described the extreme conditions the cats were living in.

"They reek of urine and poop. This is expected. Their bodies are stained with urine and caked-up poop stuck to their fur. In [addition], there are many of them with wounds of pus, some with missing eyeballs, and a whole lot of them are having cat flu - mucus and all."

The volunteers worked tirelessly to rescue the cats from the flat and soon realised that the three catteries they had rented to house the expected 56 was not enough as more and more of them appeared.

The society was alerted to the incident after several neighbours of the family had made complaints to the Housing Development Board (HDB), most of which are Siamese, reports The Straits Times.

The Agri-Food & Veterinary Authority (AVA) are investigating the case as there are "alleged welfare issues".