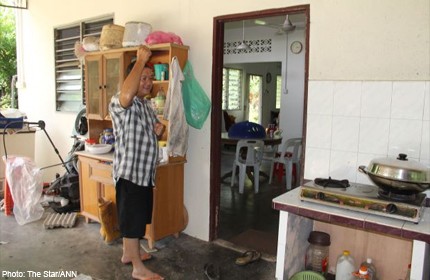 Victim'a father relating how his daughter was abducted

GEORGE TOWN, PENANG - A 14-year-old girl who was reported missing from her home in Sungai Ara, Bayan Lepas on Friday has been found.

Balik Pulau police chief Supt Hatta Md Zin said Yee Tze Wei was found in her nightgown by a few Myanmar rubber tappers at the edge of the rubber estate, a few kilometres from her house at 1am Sunday.

"Based on the victim's statement, she was abducted by two masked men and brought to a hill where one of them raped her," Supt Hatta said.

He said the victim, who was still feeling confused and traumatised, was found in a weak state as she had not been given anything to eat during the ordeal.

"Her family has been notified and she has been sent to Balik Pulau Hospital for treatment," he said, adding that police were tracking down the unidentified suspects.

Tze Wei's father Yee Tee Haw, 49,  realised she was missing when he saw her blanket on top of a table outside the house at 6am on Friday.

He said one of the men choked his daughter to prevent her from screaming when they abducted her while another man was waiting outside with a metal rod.

"I sought help from the Burmese rubber tappers nearby who brought two hunting dogs into the jungle to assist them at 8pm on Saturday," he said.

He had earlier admitted that the house located on a hill was not locked at the time as they were expecting another family member who was returning home late.