Accord maids dignity all workers deserve 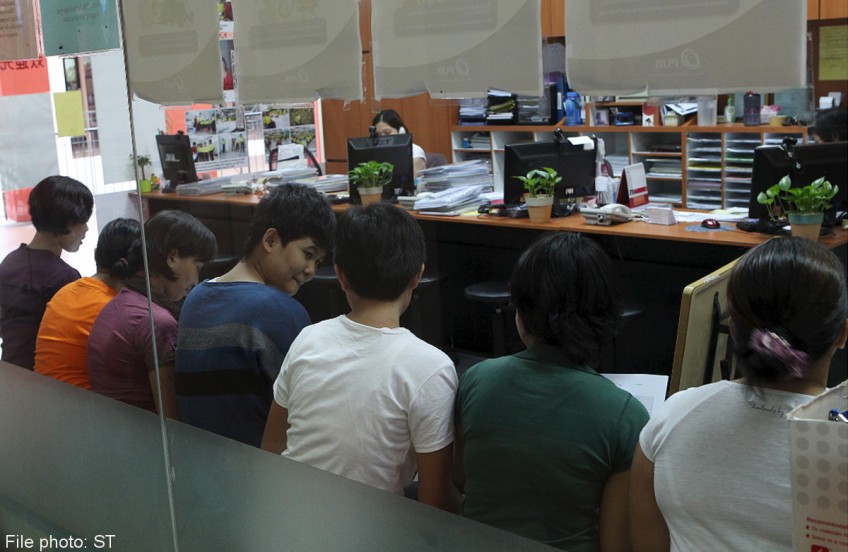 Indonesian and Fillipino maids at a maid agency.

SINGAPORE - The alleged marketing of maids as "commodities" by Singapore maid agencies is a foreign caricature that bears a ring of truth. It has prompted the Manpower Ministry to express its concern over "incidents of insensitive advertising and inappropriate display" of maids.

This should give agents, and potential employers, pause for reflection. Do Singaporeans accord sufficient dignity and respect to domestic workers who contribute significantly to help keep households humming and care for the young, elderly and those with a disability?

The gaudy "$1 maid" banners on some agents' premises betray lingering attitudes towards domestic work which, as the International Labour Organisation noted, "continues to be undervalued and invisible".

In their desperation to find work abroad, domestic workers take on debts to cover travel and fees charged by foreign agents.

In Singapore, the local agent is prohibited from charging more than two months' salary for a two-year employment contract. But when a price war breaks out in the industry, agents trim the fees they charge employers.

Some then collude with foreign agents to extract more money from maids indirectly, according to the Association of Employment Agencies (Singapore).

It is calling for a cap on the fees that employers pay on behalf of their maids and recover progressively from their salaries.

When such debts are as high as $4,000, maids might have largely no pay for eight or nine months. This is plainly unconscionable and would hardly be tolerated by other groups of workers here.

Agents need to take a long, hard look at their dubious practices, which include making employers bear the risk of loan defaults, for example, when distraught maids run away.

Stricter rules in Singapore will help but can be circumvented, for example, by claiming exorbitant fees are due to foreign agents.

Efforts to curb unscrupulous practices abroad can bear fruit only with the cooperation of foreign authorities. Activists have long called for the "creation of an ASEAN standard on social protection and welfare" for the benefit of migrant workers. Kicking the can down the road will prolong their woes.

On their part, Singaporeans must go beyond just paying lip service to a fair deal for migrant workers.

Most people are unlikely to be employers in their lifetime but for a maid in their home. As such, they ought to aspire to be as fair as their expectation of a good boss at their own workplace.

The sound attitudes of employers could rub off on agents and help to professionalise the hiring of maids. Most Singaporeans would be appalled by any form of abuse suffered by maids here. So, why should financial abuse be any different