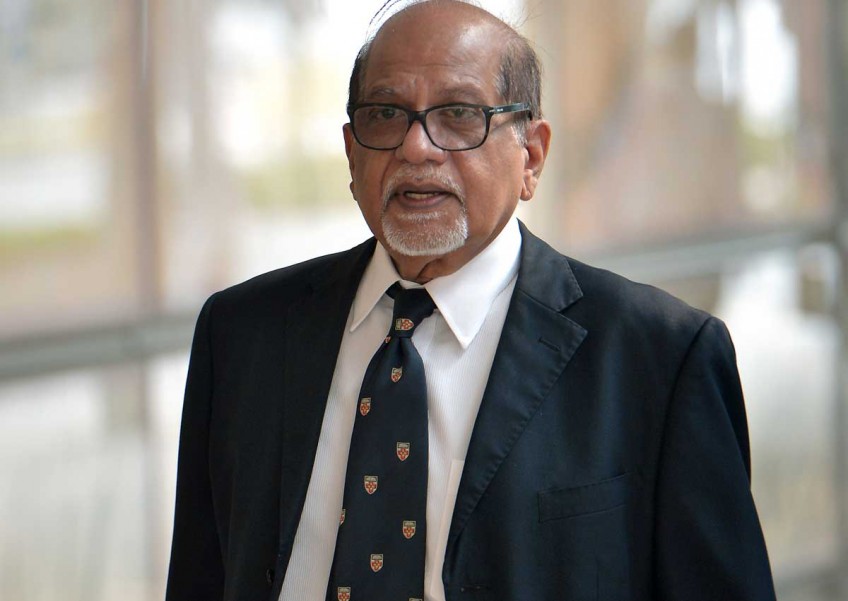 Seven days before Govindasamy Nallaiah allegedly killed his lawyer's wife on Aug 10, 2011, his son Ramanathan had an angry confrontation with him.

He had a week to settle his father's outstanding legal fees before his possessions, as he was a guarantor, would be seized and sold. Govindasamy, 70, told him not to worry, promising he would find a way out.

On Aug 10, the day the debt was due, the lawyer's wife was dead and the law office torched.

Yesterday, more details about how Govindasamy had kept his legal and financial troubles from his family emerged in the High Court, when his children testified as prosecution witnesses in his trial.

Govindasamy's relationship with his two eldest children, who were his guarantors, was strained because of the debt. His eldest child, Ms Letchmi Ghandi Govindasamy, was not on talking terms with him, though they lived in the same home.

The prosecution alleges that Govindasamy went to the office of his former lawyer, Mr Rengarajoo Rengasamy Balasamy, at the Afro Asia Building, where he allegedly hit Madam Low Foong Meng, 56, on the head with a bicycle chain until she was unconscious.

He then allegedly set alight some files and left Madam Low in the burning office. Her charred body was later found by firefighters.

The court heard that Govindasamy had been a senior Customs officer for more than 30 years when he was investigated for graft in 2002. He engaged Mr Rengarajoo to represent him at his trial.

His two eldest children, both civil servants at the time, stood as guarantors for the fees, which amounted to $25,000.

But the children, who were composed and calm when they spoke on the stand barely 2m away from their father, said they did not know what his corruption case was about.

After his conviction, Govindasamy was sacked and had his retirement benefits terminated. He became a taxi driver after leaving prison, working seven days a week. He also made a loss from the sale of his house in Casuarina Road in December 2006. By then, he was bankrupt.

Together with his wife, who was diabetic and wheelchair-bound and their youngest son, he later moved into Ms Letchmi Ghandi's Jurong West home, where she lived with her husband, daughter and a maid.

Mr Rengarajoo began legal proceedings against Govindasamy in 2005. A lawyer Govindasamy engaged to help him, Mr Willie Yeo, testified yesterday he wrote to Mr Rengarajoo that year to pause the lawsuit but got no reply.

Over the next five years, the children were alerted to the debt once each - Mr Ramanathan and Ms Letchmi Ghandi received letters indicating legal action in 2008 and 2010, respectively. But Govindasamy assured his children that he was taking care of the debt, even telling his daughter, who offered to pay $38,000, that there was no need to do so as legal action had already started.

In July 2011, Mr Ramanathan went to see the lawyer after getting another letter, and offered to pay $10,000 upfront, and the rest in instalments. But Mr Rangarajoo was angry and rude, and told him to return with his sister and father the following Monday, said Mr Ramanathan. Govindasamy, however, told his son he would go to the firm on his own.

On Aug 3, Mr Ramanathan received notice of the one-week deadline to repay the debt.

Yesterday, Govindasamy's younger son Nades, son-in-law Govindarajlu Udaya Shankar, and family maid Subbaiyan Radhika also took the stand. The court allowed his family to speak with him after they had testified, and Ms Letchmi Ghandi was seen crying as she kissed her father's hands while he stood in the dock.

Mr Rengarajoo is expected to take the stand today.