Adjunct teacher was 'unaware of bullying' 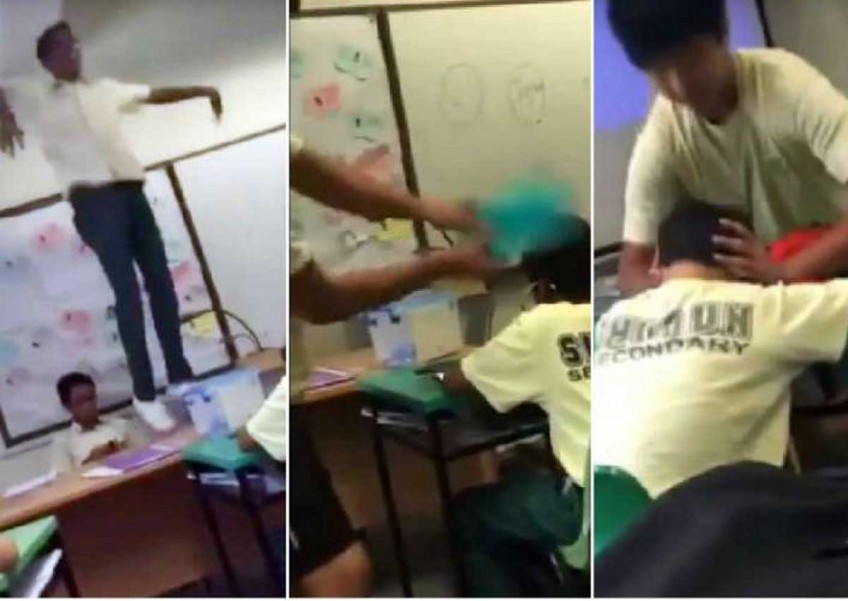 The adjunct teacher who was in class during a bullying episode at Shuqun Secondary School was apparently unaware of the incident when it happened.

Instead, he was trying to get a student who was dancing on his table to get off, according to the mother of one of the bullied boys.

The mother, who would not give her name, was told that the adjunct teacher - described by her son as a "well-liked, elderly gentleman" - allowed the students to relax in class as it was a relief period.

The subject teacher who was supposed to take the class was on childcare leave.

"It is shocking that this happened when a teacher was in class," she told The Straits Times.

"As parents, when we send our kids to school, we hope for them to learn, and in a good environment, not with music blasting and students jumping on the table."

The school's principal, Mr Chia Hai Siang, has since assured her that this incident is not the norm, and will not happen again.

A 52-second video clip posted online on Monday showed a boy from the school hitting two other boys on their heads repeatedly.

Both victims kept their heads low and did not retaliate. Another student was seen dancing on the teacher's table while loud music played in the background.

The mother, who is in her early 40s and works in administration, did not know her son was being bullied until the clip surfaced. But she noticed that her son had been going to school later than usual, just to avoid the bully.

She noted that the two victims had initially sought help from their teachers when they were first picked on by the same student months earlier.

On one occasion, her son approached a teacher for help when the bully started jabbing him with a pen repeatedly.

The teacher spoke to the bully about the incident, but it backfired. The bully then threatened the boy.

"Since then, my son has not flagged it to other teachers. He held back, as he feared the consequences," she explained.

The bullying continued for five months.

During an hour-long meeting with the principal on Wednesday, the principal suggested transferring the bully, who is in the same Secondary 3 class as the two victims, to another class.

Besides asking the bully to apologise verbally and in writing, the school will arrange a meeting between the students involved.

Shuqun Secondary School has also taken disciplinary action against those who behaved inappropriately.

Recognising the students' youth and remorse, Mr Chia noted that the school is counselling them to "ensure they learn and make amends".

The mother, who has a younger daughter in primary school, said her family is trying to move on from the incident.

"My son is mostly embarrassed by all that attention," she said, adding that he has not returned to school following the incident, but would do so next Monday.

"We know that the school teachers have done a good job in helping my son throughout these years. They are as upset and surprised to learn that he has been bullied for so long," she said.

"I hope that more can be done to empower these victims to speak up against bullying. He did not have to suffer in silence."

This article was first published on Sep 26, 2015.
Get a copy of The Straits Times or go to straitstimes.com for more stories.