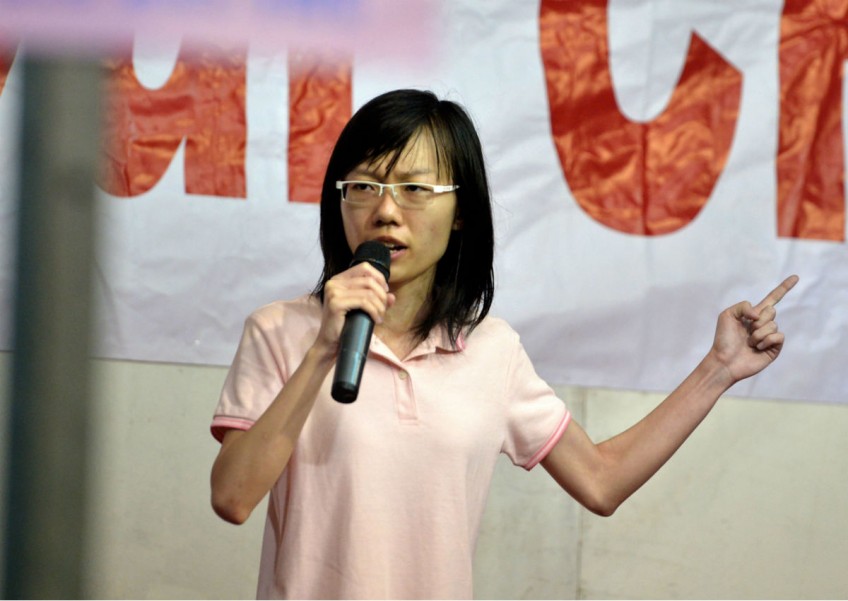 The Attorney-General's Chambers (AGC) has asked blogger Han Hui Hui to remove a series of online posts in which she alleged judges had lied to persecute her politically.

The AGC wrote to her on Monday and gave her seven days to take down the posts and apologise for her allegations on all her social media accounts.

If she fails to comply, the AGC will file contempt of court proceedings against her, an AGC spokesman told The Straits Times yesterday.

Ms Han, 25, had posted a video on YouTube and made five Facebook postings between Jan 21 and Feb 25 about her brush with the law.

Last June, she was fined $3,100 for co-organising a protest rally in 2014 that disrupted a charity event in Hong Lim Park and organising a demonstration without approval. Last month, the High Court rejected her appeal against the ruling.

The AGC said on Monday the online posts are in contempt of court.

For instance, a Jan 22 post "wrongfully states that you and the other co-accused persons tried jointly with you were convicted because the court wanted to politically persecute you and your co-accused".

"In addition, it wrongfully insinuates the court secured your convictions by deliberately finding fault with you on unimportant issues."

Ms Han had written in the Jan 22 post that the court's ruling was "a blatant case of political persecution".

She said her fine had "the sole intention of political persecution to disqualify me from standing for parliamentary election".

A person convicted of an offence and fined $2,000 or more is disqualified from being an election candidate. Ms Han stood in Radin Mas in the 2015 General Election.

"These are very serious allegations which scandalise our courts. They are scurrilous, false and made without any rational basis," the AGC said in its letter to Ms Han.

Ms Han posted on her Facebook page on Monday that the AGC had written to her.

But she has not taken down the posts the AGC says are in contempt of court.

In a separate statement yesterday, the Ministry of Home Affairs (MHA) refuted Ms Han's claims that she had been mistreated in a State Courts cell.

She alleged, among other things, that she was subject to a strip search while male officers walked by.

MHA said she was clothed when she was searched by a woman officer.

Also, she was held in the women's wing of the lock-up, which male officers cannot access.

MHA noted Ms Han could have raised issues about her treatment while she was in custody.

It said: "Instead, she chose to publish the fabricated, false and misleading accounts on social media.

"MHA takes all allegations seriously and will investigate them thoroughly."