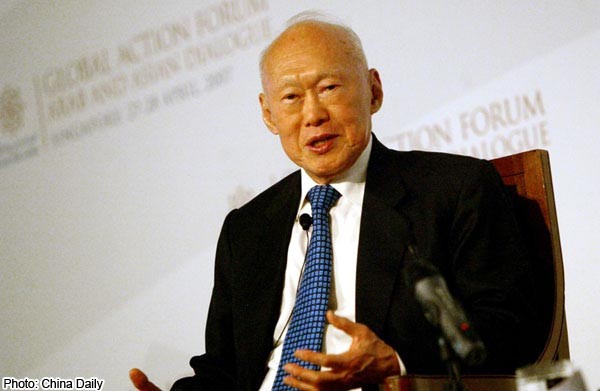 Singapore's Minister Mentor Lee Kuan Yew speaks to the audience during the Arab and Asian dialogue in Singapore April 27, 2007.

Our deepest condolences go to the family of Mr. Lee Kuan Yew. Together with the community, we mourn the loss of Singapore's founding Prime Minister whose contributions will be long remembered.

On this occasion, we recall his strength and conviction in transforming Singapore into a home for people from all walks of life, and his unreserved dedication to public service will continue to inspire us.

Mr. Lee Kuan Yew, you will be dearly missed.

We are saddened to learn about the passing of our nation's founding Prime Minister Mr. Lee Kuan Yew and extend our deepest condolences to his family.

Together with the people of Singapore, we mourn the loss of an extraordinary human being who has made an indelible imprint on our hearts and minds.

It was under his leadership that Singapore was transformed from a former colonial trading post into a thriving metropolis, and we will continue to be inspired by his sheer determination to succeed against all odds.

With his passing, the world has lost a visionary and a gentleman.