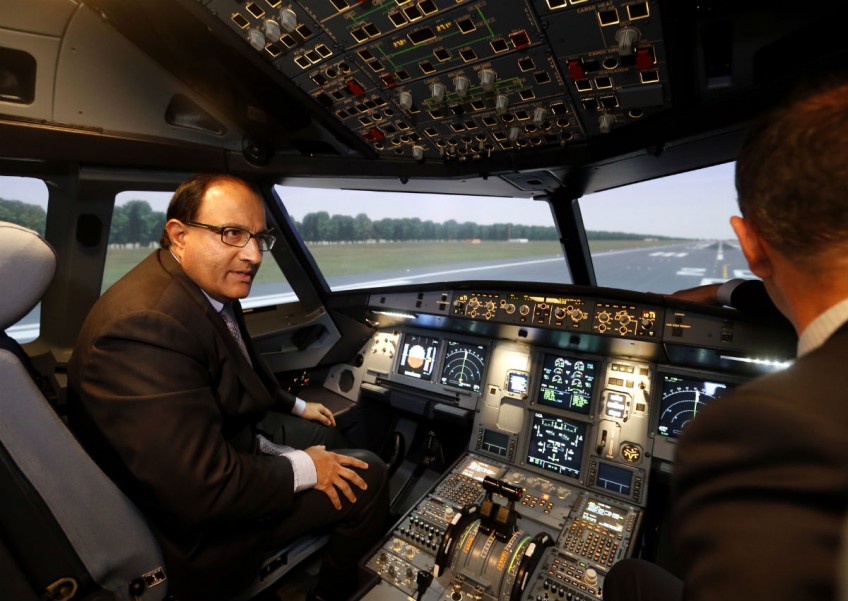 Mr S Iswaran, Minister of Trade and Industry, visits the full-flight simulator A320 at the Airbus Asia Training Centre on April 18, 2016.
The Straits Times

European aircraft-maker Airbus on Monday opened a training centre in Singapore, its second in Asia, as it aims to meet demand for pilots and other flight crew in a region expected to see a travel boom.

The 100,000 square foot US$100 million (S$136 million) centre offers training and refresher courses for crew staffing Airbus planes including the double-decker A380 and the A350, Airbus said in a statement.

When fully operational, it will be Airbus' largest flight crew training facility, with eight full-flight simulators, six fixed cockpit training devices and extensive classroom facilities, with capacity to churn out more than 10,000 trainees per year, it said.

Airbus' other training centres are in Beijing, Miami and its headquarters in Toulouse.

The Asia-Pacific is expected to lead demand for new aircraft in the next 20 years, with the regional fleet forecast to grow from around 5,600 aircraft currently to 14,000 over that period, Airbus said.

This will push the number of flight crew employed by airlines in the region to almost 170,000 from over 65,000 in the next two decades, it said.

Airbus' chief salesman John Leahy said at the Singapore Airshow in February that Asia's burgeoning middle class would drive travel growth in the region, which would require the need for more aircraft.

"Our investment in this joint venture is another example of our commitment at Airbus to bring our support services closer to our customers around the world, and especially in the key growth markets," Airbus president and chief executive Fabrice Bregier said Monday at the opening of the training centre.

Seventeen airlines across Asia Pacific have already signed up to train their crew at the new centre.

The centre is a joint venture between Airbus, which holds 55 percent, and Singapore Airlines, which owns 45 percent.

US plane-maker Boeing also has a training centre in Singapore, a regional aviation hub.