'All the money in the world cannot compensate for this' 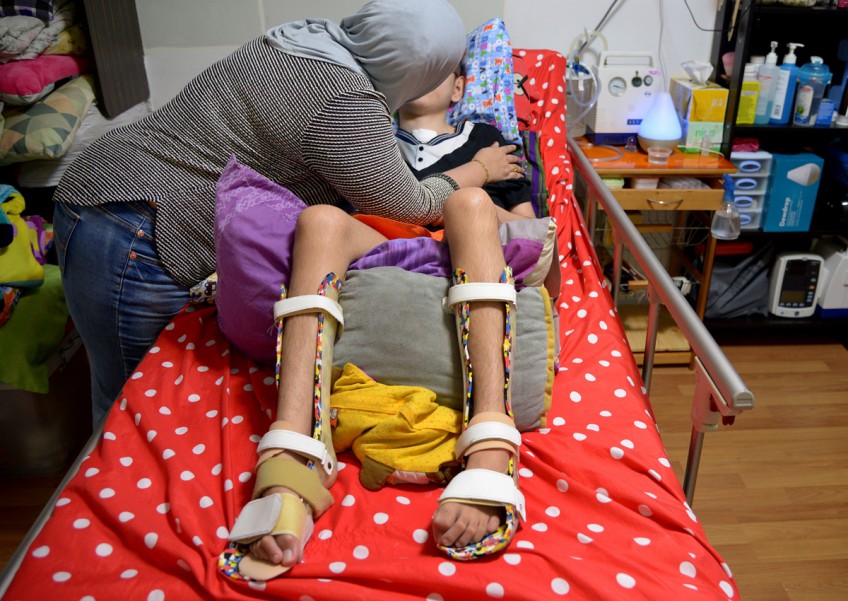 The 13-year-old and his mother, who quit her job to care for him full time. The boy, who became a quadriplegic after being knocked down by a car in 2011, has been awarded $1.64 million in damages. Most of the money will go to his medical and daily needs, which come up to about $1,000 every month. But his mother worries that the cost of living will only get higher.
The Straits Times

Her heart breaks a little every morning when she wakes up and sees her 13-year-old son.

Once an active boy who loved to cycle, enjoyed football and played video games, he now cannot move any of his limbs, except for his left hand. He is also unable to talk or swallow, after suffering a traumatic brain injury when he was knocked down by a car in 2011.

Last week, the High Court awarded him $1.64 million in damages, the biggest reported payout for a young victim of a traffic accident. This was after his family appealed against the initial award of $1.25 million last December.

His mother told The Sunday Times it is still too early to say if they would appeal. To protect the minor's identity, the family is not being named.

"When I think about the future, the cost of living is only going to climb higher and higher," said his mother, explaining that most of the money will go to her boy's medical and daily needs.

But no amount of money "can compensate for what had happened to my son. So what if I had all the money in the world? He would still be in this situation".

Their lives were turned upside down on the evening of July 6, 2011.

The boy, who was in Primary 3, was on the way to meet a tuition teacher in Jurong East with his two siblings. According to what eyewitnesses told his mother, he was hit by a Mazda 3 sedan while using a pedestrian crossing.

Her daughter, now 16, and her youngest son, now nine, witnessed the entire scene.

"When I heard the news, it felt like my world had collapsed," said the 39-year-old mother.

In 2013, the driver accepted 100 per cent liability for the accident. According to her, he has not apologised to the family or met them in person.

When the accident happened, she was a divorcee getting by on a monthly income of $1,500 as a receptionist at a law firm.

When her son was discharged after three months in hospital, she had the option of putting him in a home.

"I didn't have the heart to do that," she said. So she quit her job to care for her son full-time.

Her former colleagues chipped in financially, and the family also received social assistance, helping to pay for most of his hospital bills.

She remarried in 2012, and her husband, an assistant production supervisor, is the sole breadwinner on a monthly income of $1,800.

They live in a three-room HDB flat in Tampines. Life is structured around her son's needs, and finances are tight.

Their flat is still being paid for. And there are monthly instalments of $800 for a second-hand car bought to take him for his weekly rehabilitation sessions at KK Women's and Children's Hospital.

A maid was hired to help with the household chores and the other two children.

Medication, gauze, diapers and milk powder for the boy come up to about $1,000 every month.

Because his breathing was impaired after the accident, he had to be fitted with a tracheostomy tube.

It has since been taken out, but the opening left in the neck has to be meticulously tended to to ensure that it heals and closes completely.

"We have to suction the hole and clear out the phlegm, and make sure that he doesn't choke. I also get up in the middle of the night to check on him," said his mother, who had tried to look for a job, but was rebuffed by several companies unwilling to accommodate her need for flexible hours.

The wound and his weakened immune system also leave him vulnerable to upper tract infections and pneumonia. He often gets fevers, with his temperature sometimes shooting up to 40 deg C.

Last year, he suffered from a serious bout of pneumonia and had to be hospitalised for five days.

"We need to make sure that he doesn't come into contact with dust or bacteria so we clean and disinfect his room thoroughly every day. The whole family doesn't go out much anymore because it is dangerous for him," explained his mother.

Since the accident, she has also grown more worried when her other children go out.

"I would tell them to meet me somewhere and I would wait across the place, to check how they cross the road," she said.

But there is no shortage of hope.

Her son may have no words for her, but she does not stop talking to him. "He communicates with me by pointing at things, or through simple sign language."

The family includes him in card or board games. "We're not sure if he is fully conscious of us, but we want to try to engage him. We want to show him that we are positive.

"I am crying inside, but we all try to smile and be strong for him."

Before sleep, she would look up information on the Internet about what other forms of treatment might improve her son's condition. She has also attended courses in Reiki, a form of Japanese alternative medicine.

When The Sunday Times visited the family at their home, the boy smiled at reporters from his bed and reached out with his left hand to shake hands.

She prays he can learn how to take care of himself as he gets older. He still cannot attend school because he does not have the ability to control his spine muscles and sit down.

"But I hope he can do that soon, so that he can make friends and learn," she said. "His name means warrior - he's a fighter."