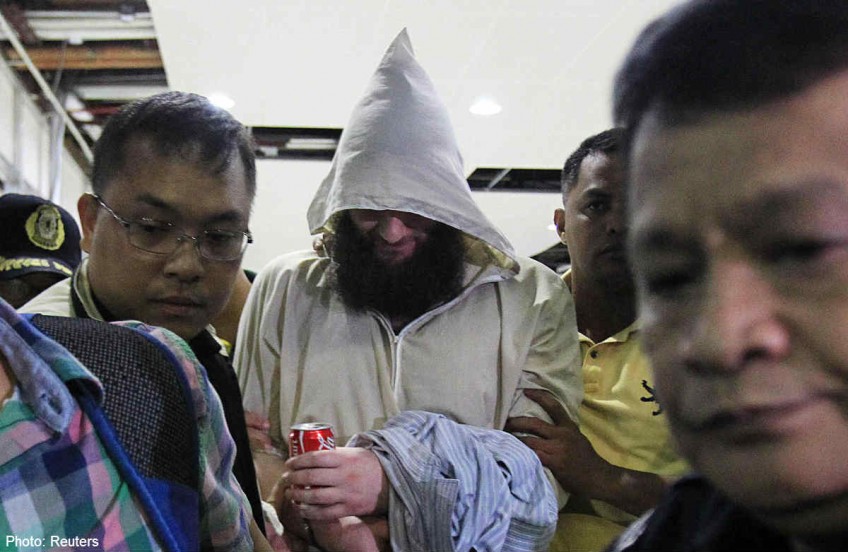 Musa Cerantonio (C), an Australian national and a Muslim convert, is escorted by police intelligence upon arrival at the domestic airport in Manila July 11, 2014.

SYDNEY - An Australian convert to Islam arrested in the Philippines for allegedly urging people to join "jihad" in Iraq and Syria was deported to his homeland Wednesday, but police said he would not be charged.

Musa Cerantonio, 29, was detained in the central city of Cebu on Friday and sent back to Australia where he was met by police.

"Mr Cerantonio's known social media postings are considered offensive and disturbing, however, have been assessed as not breaching Australian law to this point," Australian Federal Police (AFP) said in a statement.

"The AFP will continue to monitor and assess this material for any breaches of Australian law into the future." Philippines officials have said Cerantonio was arrested at the request of the Australian government and was deported because Canberra cancelled his passport, making him an illegal alien.

Australian police said only that Cerantonio had been deported by the Philippine authorities "as a result of invalid travel documentation".

Police in the Philippines said they had been monitoring Cerantonio's activities since February when he arrived in Cebu, the country's largest metropolis outside Manila.

The Philippines has a large Muslim minority in the southern region of Mindanao, a hotbed for a decades-old Muslim insurgency and where Islamic militants linked to Al-Qaeda also operate.

But Cebu's police commander, Chief Superintendent Prudencio Banas, has said there was no evidence linking the Australian to any terror act.

He lived with a Philippine woman and moved around Cebu until his arrest at a one-room apartment near the airport.

"It seems that he is just a fraud, because he was saying that he was fighting in Syria and Iraq when all the time he was holed up in a flat in the Philippines," Foreign Minister Julie Bishop told Sky News last week.

Australia has expressed deep concern that about 150 Australians, some of them dual nationals, were learning the "terrorist trade" fighting alongside Sunni militants in Iraq and Syria.

The government has confirmed that two Australians, including an 18-year-old, have been behind deady suicide bombings in the Iraq and Syria conflicts, without providing further details.