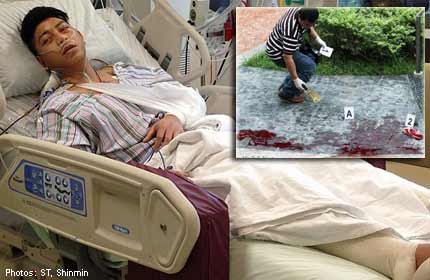 SINGAPORE - A 20-year-old mover, Mr Mohammad Ashiq Saptu, was seriously injured after he was attacked by two men in a park facing Block 641, Ang Mo Kio Avenue 4, around 5.30pm on Sunday.

Get the full story from The New Paper.

Speaking to The Straits Times from Khoo Teck Puat Hospital yesterday, a bandaged and weak Mr Ashiq said doctors told him they may need to amputate his right leg should a major operation fail today.

A 20-year-old man has been left grievously injured after he was hacked by an attacker wielding a pair of 80cm long knives yesterday evening at around 5.30pm.

A big pool of blood, a knife, and a pair of white slippers were seen at the incident site.

The victim's girlfriend, a 19-year-old student, said her boyfriend had stayed over at her place the night before the incident. He then said he wanted to meet a friend downstairs.

Sensing something was wrong, she followed him down, only to find her boyfriend lying wounded in a pool of blood.

The victim was sent to hospital.

Police officers found a sheath measuring close to 80cm. It is believed that the weapon which the attacker used is more than 80cm long.

Another witness, a 21-year-old student, told the Chinese daily that the victim was attacked by two other men, one of whom restrained him while the other hacked at him.

The men fled only after her grandmother then shouted "Police! Police!".

When they went down to investigate, they saw that the victim's legs and one of his arms had been deeply cut. He was very pale and was lying in his girlfriend's arms.

Witnesses said the victim had tried to protect himself with his arms and tried to defend himself by kicking his attackers.

The 21-year-old witness' brother then instructed those nearby not to move the victim and told the victim's girlfriend to keep talking to him so that he wouldn't fall unconscious.

The victim's girlfriend said he was in a stable condition even though his injuries were severe.

Other witnesses said the attackers ran off in opposite directions, then met each other across the road.

The police said the victim was sent to hospital in a conscious state. Investigations are ongoing.