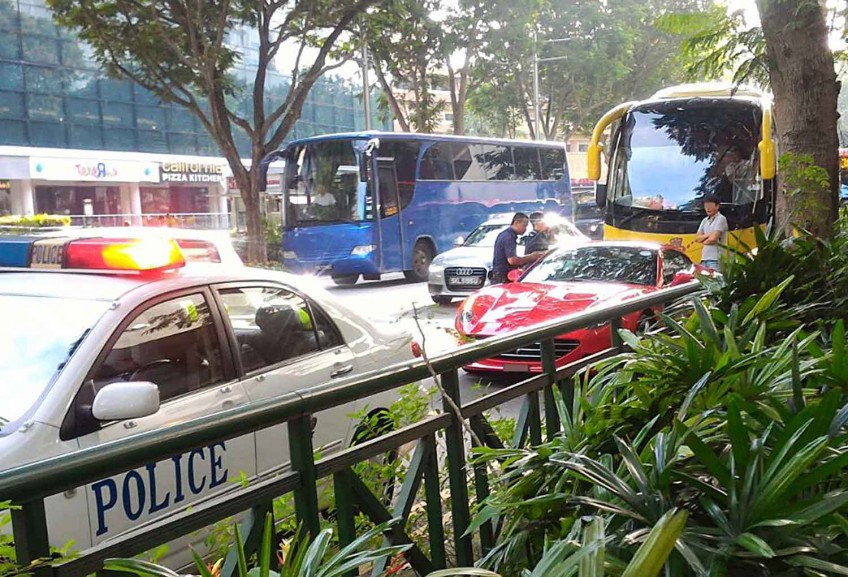 A red Ferrari stopped in the middle of busy Orchard Road in front of Orchard Towers on 29 June 2016 causing a traffic jam.
Shin Min Daily News

An angry Ferrari driver stopped her car in the middle of busy Orchard Road on Wednesday, causing a traffic jam.

She wanted to confront a tour bus driver who had allegedly honked at her for being slow in making a turn.

Mr Ivan Chen, 21, who works part-time as a captain in a restaurant, told The New Paper yesterday he was taking a break from work and walking in front of Orchard Towers when he witnessed the exchange on the road in front of the building.

According to him, the Ferrari driver, who looked to be in her 50s and was dressed in black, had rushed up to the packed tour bus and confronted the driver by asking him in a loud voice in English: "Why did you honk at me?"

She also lectured the bus driver on road courtesy. "The bus driver responded in a calm manner and tried to reason with her," said Mr Chen.

This went on for about five minutes, he said, until a police car arrived.

The officers persuaded the woman to move her car to the left side of the road, along the bus lane. The bus driver did the same.

Mr Chen said: "Many onlookers also felt angry at the Ferrari driver for causing the jam and whipped out their handphones to take photos and videos."

"The Ferrari driver kept shielding her face with her hands when she was aware of this," he added.

A police spokesman said they received a call about the commotion and resulting jam at 5.38pm.

The officers advised both parties to keep the peace and they complied, the spokesman added. No further police assistance was required.

Mr Chen said: "I felt that the Ferrari driver was too much. Just because you drive a sports car, you think you are so big?"

This article was first published on July 01, 2016.
Get The New Paper for more stories.