Archie book yanked off the shelves 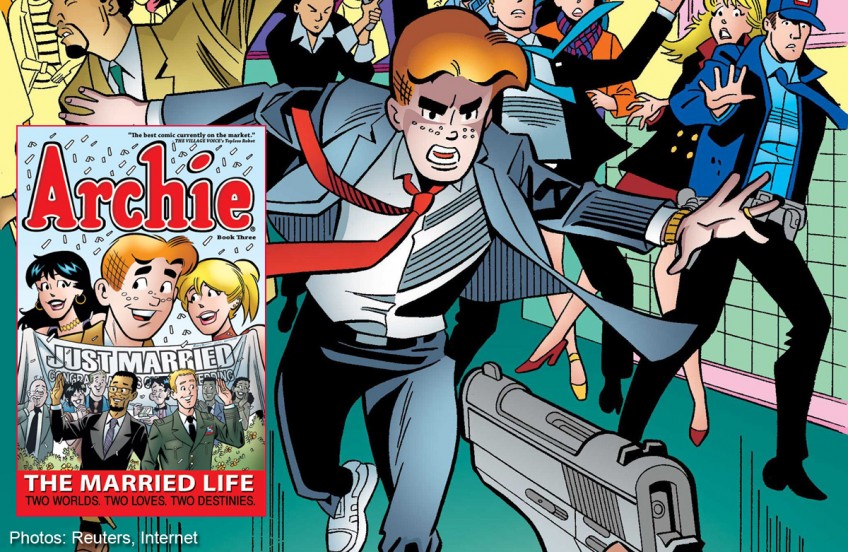 Archie: The Married Life Book Three (inset) has been banned. Reportedly, Archie Andrews, the redheaded American teenager in the "Archie" comic book series, will die taking a bullet protecting his gay friend in the issue that comes out on July 16.

SINGAPORE - Even comic-book hero Archie has been dragged into the debate on suitable books.

Archie: The Married Life Book 3, which features a gay couple getting married, has been yanked off shelves after its content was deemed to have breached the Media Development Authority's (MDA's) content guidelines.

In response to media queries, an MDA spokesman said it assessed the comic book in March, after receiving a complaint, and "found its content to be in breach of guidelines because of its depiction of the same-sex marriage of two characters in the comic".

The removal of the Archie comic book was discovered when comic artist and illustrator Sonny Liew wrote in to Kinokuniya last week. Mr Liew did so after checking the bookstore's book catalogue, only to realise that it did not carry that particular volume of the series.

"I'd figured that the pressure groups sending out letters to public institutions might not just stop at libraries; it seemed logical that they would want books with objectionable content removed from other sources, including commercial bookstores, so I did a check on that particular volume of Archie, which I know had attracted attention in the United States for featuring a gay marriage," said the 39-year-old in response to media queries.

A day after he wrote in to the bookstore, Mr Liew received a reply that the comic book had been removed.

The reply stated: "We regret that Archie The Married Life 3 is deemed to breach the Content Guidelines for Imported Publications, and removed from sale by notice of MDA. We are not able to sell this title."

It is unclear when the comic book was removed. Kinokuniya did not respond to queries from My Paper.

The comic book, which was published last year, features marriage between gay character Kevin Keller and his African-American partner, Clay Walker. Earlier, the publisher said that main character Archie would die this week, after taking a bullet intended for Keller.

MDA said that, after reaching its decision, it informed the local distributor not to import or distribute the comic in retail outlets.

"The Publications Consultative Panel, which comprises a cross-section of Singapore society, was consulted. Its members advised that the theme of the comic was not in line with social norms and is in breach of existing content guidelines," said the spokesman.

The import and distribution of publications is largely self-regulated, and book retailers refer to MDA's content guidelines for imported publications.

The National Library Board (NLB) has four copies of the comic book, with three on loan and one copy "in transit".

NLB said that it had acquired the book before MDA found the content to be in breach of the guidelines, and that it will be reviewing the book in the light of MDA's decision.