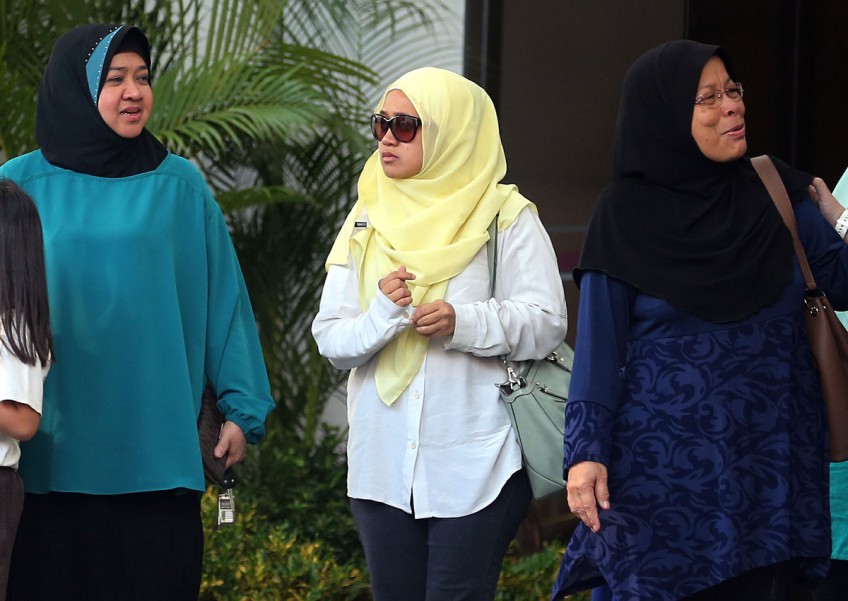 Ms Nurul Asyikin (centre) with family members outside the coroner's court yesterday. Her husband had second-degree burns on more than 80 per cent of his body.
The Straits Times

Six months after he died from a blaze he had unknowingly started, Mr Rizalludin Hassan's four young children still miss him dearly.

"They look for their father still, (especially) my four-year-old son," said his widow, Ms Nurul Asyikin Norman, 34, of their children aged one to nine.

The IT engineer, 34, was trying to light two aromatherapy diffusers in his master bedroom toilet on Oct 13 last year, when he unknowingly ignited vapours from an essential oil fluid, causing a flash fire.

He had second-degree burns on more than 80 per cent of his body and died in hospital nine days later.

The extensive burns he suffered were from an "inadvertent flash fire", the coroner said. "The circumstantial, forensic, testimonial and scene evidence points to the demise ... to have arisen from an entirely accidental event."

In his findings, the coroner warned users of aromatherapy diffusers to be mindful of the volatile nature of aromatherapy essential oils, and to adopt precautions when handling the fluids, particularly when refilling diffusers from high-volume refill containers.

Given that the lowest temperature at which the fluid's vapours will ignite is 16 deg C, refill containers should not be left uncapped for extended periods of time, he said.

The refilling of diffusers, he added, "should also not be undertaken in any confined or unventilated spaces, where the vapours might build up to levels that can prove hazardous in the presence of any potential ignition source".

And refill containers should also be kept "a significant distance" away from an ignited diffuser or any open flame, the coroner said.

Ms Nurul Asyikin, her mother and her mother-in-law sobbed as Mr Bay read out his findings.

Asked how the family was coping, Ms Nurul Asyikin, a school teacher, said outside the court later: "We have a lot of support from family, especially my husband's parents, friends and the public. We will try to recover."

She added that the inquiry had brought back "painful images".

On whether the family was considering a civil suit against the company that sold the diffuser, she said they have not decided, although they have consulted a lawyer.

Mr Chok said the oil refill fluid had to be imported as a kind of "dangerous goods" and a "flammable liquid", but he said yesterday he was unaware that the liquid's vapours were also flammable.