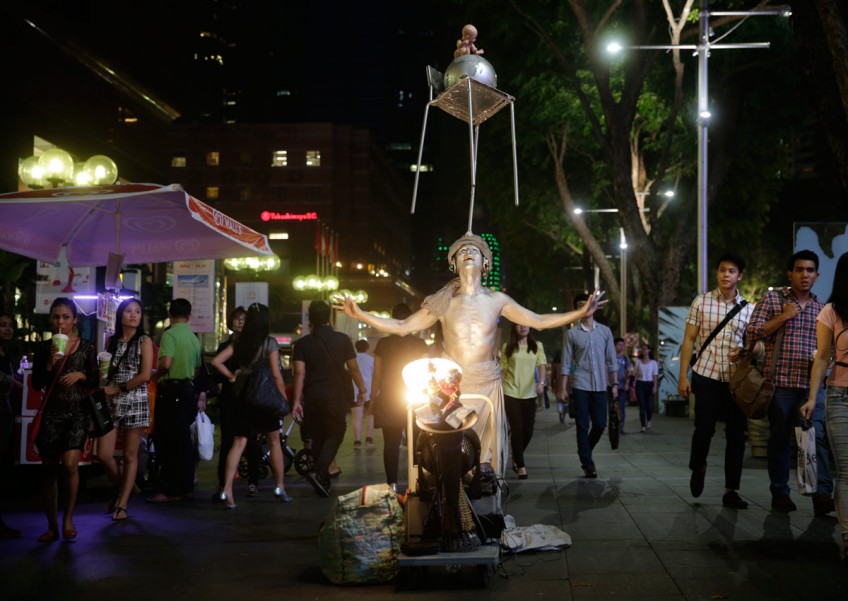 Street busker Roy Payamal, who was arrested on Saturday (March 11) night on Orchard Road, said he believed the whole episode was just a misunderstanding.

Known to many as "Silver Man" as he often performs with his body and face painted silver, Mr Payamal was arrested for disorderly behaviour but released on Sunday morning.

Speaking to ST after his release, Mr Payamal, 53, said he believed his naturally loud voice led to a misunderstanding and added that he was treated well by the police.

"I'm fine. It's just a misunderstanding. My voice is naturally loud as an entertainer and a rocker but it just sounded to them like I'm shouting," he said.

He also wrote on Facebook on Sunday morning that he would be back performing that same night.

"Am having my fishball noodles then rest and go busking tonight at Taka, yay!" he wrote.

Mr Fong, 48, told The Straits Times that he and his wife were walking near Takashimaya when he saw two police officers - a man and a woman - approach Mr Payamal to check his busking licence.

While Mr Payamal appeared annoyed, he produced his licence, but he told the male officer to speak to him in English, according to Mr Fong.

Mr Payamal said that the male police officer was speaking to his colleague in Mandarin.

"I then spoke to him in Mandarin saying that I rather he speak English instead of Mandarin as it is our working language," he said.

People had started to gather and the police officer took out his handcuffs and stepped nearer, he said. At this point, Mr Fong asked: "Why did you take out your handcuffs?"

"I'm just standing up for a fellow Singaporean," he told The Straits Times on Sunday. He added that he lodged a complaint with the police about the incident.

The post has triggered an online debate, with some speaking up for Mr Payamal, but with others asking Mr Fong if he was too quick to judge the police officers.

The Straits Times understands that a member of the public had complained about Mr Payamal and alleged that he was asking for tips from the public by placing his hat on the ground.

According to rules, a licensed busker is not allowed to actively solicit for gratuity, but Mr Payamal did not break any of those regulations.

It is understood that Mr Payamal was unhappy that he was the only performer being checked by the police. He then produced his licence but raised his voice, gesticulated and attracted a sizeable crowd.

After Mr Fong intervened, it is understood that the male police officer told Mr Fong not to obstruct his work.

When contacted, the police said they received a call for assistance at Orchard Road at 9.22pm on Saturday.

A 54-year-old man was arrested for disorderly behaviour and police investigations are ongoing.

Mr Payamal was featured in Singapore Minstrel (2015), a non-fiction look at a busker's life, by filmmaker Ng Xi Jie.

He has been busking full time since the late 1980s.