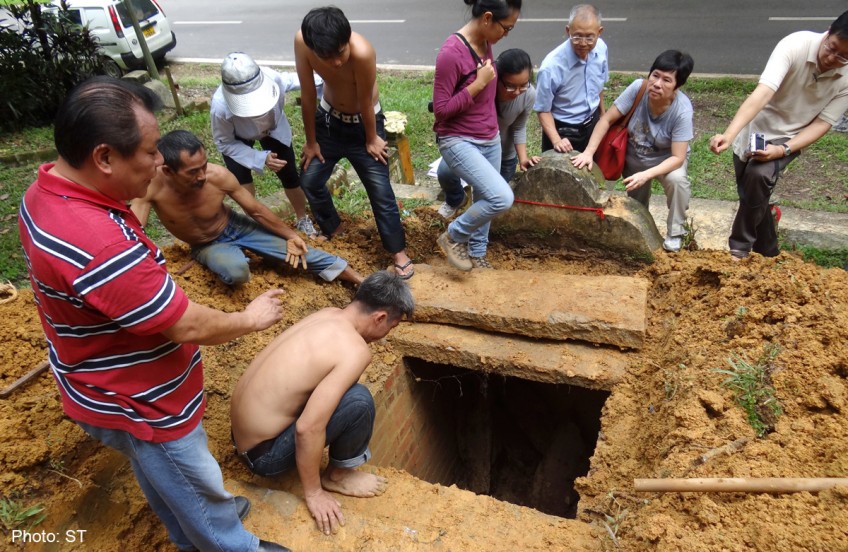 SINGAPORE - More than 2,000 artefacts have been unearthed from Bukit Brown Cemetery since last year and a selection of these will go on display from today.

The items were retrieved from the more than 3,000 graves that have been exhumed since late last year to make way for a new road. The 233ha cemetery is home to nearly 100,000 graves.

Common objects dug out include miniature clay and porcelain vessels, replicas of cookware for use in the afterlife and accessories, such as jade and silver bangles, hairpins, as well as brooches used by Peranakan women to fasten their sarong kebaya.

The cemetery, which houses Singapore's oldest graves, has been held up for its rich biodiversity, cultural traditions and the unique architecture of its tombs. It also tells the story of Singapore's migrant history, with many prominent pioneers buried there.

The building of a road, which will begin in stages after the 3,746 affected graves are exhumed, had sparked intense debate between heritage and nature groups, and the Government in 2011.

At the exhibition featuring 57 of the artefacts, the public will also be able to see photographs of the underground chambers designed to protect the integrity of the coffin and its remains. The chambers were lined with bricks or punctured with drainage holes at times to keep the interior dry.

This is believed to be the first time exhumed objects from graves are available for mass viewing.

Anthropologist Hui Yew-Foong, the appointed documentarian of Bukit Brown cemetery, said it is fairly common for middle-class families to have artefacts buried with the dead.

"But they are important finds because they reflect, firstly, the material culture of pre-war Singapore and secondly, they reflect Chinese burial culture."

"It gives people an intimate glimpse into the customary burial traditions that are likely to be no longer practised now and they get a sense of the personal in this macro project," she added.

Besides being able to view the artefacts up-close, exhibition-goers can also get data on specific graves via a map-based database of 500 exhumed graves.

A tap on the grave icons on the map reveals a picture of the grave, its inscriptions, dates and other features.

When completed, the database will cover about 4,000 graves.

Tomb inscriptions and typology shed light on Singapore's historical links to the region, China and the world, said Dr Hui, a senior fellow at the Institute of Southeast Asian Studies.

The exhibition will trace the the history of the 1922 municipal cemetery, up to its closing in 1973, through maps and aerial photographs. Field work on the documentation project started in 2011 and the public can get a peek of some of the behind-the-scenes work at the exhibition.

For the first time, cutting-edge techniques and technology such as 3D scanning are used to document the graves. Such technology is useful for analysing the layout of cluster graves or graves with complex features, said the National Heritage Board's (NHB) group director of policy, Mr Alvin Tan.

Photographs and documents affirm how the cemetery bustles with activity during Qing Ming, Hungry Ghost and Winter Clothing festivals.

Dr Hui and his team also followed families who are exhuming their ancestral graves to observe and record the rituals.

The exhibition will run at the National Library from today till Oct 10 and at other libraries subsequently. It is organised by the Bukit Brown documentation team and co-funded by the NHB, Singapore Hokkien Huay Kuan and the Hokkien Foundation.

This article was first published on July 19, 2014.
Get a copy of The Straits Times or go to straitstimes.com for more stories.

[[nid:124906]]
SUBSCRIBE TO OUR NEWSLETTER
Your daily good stuff - AsiaOne stories delivered straight to your inbox