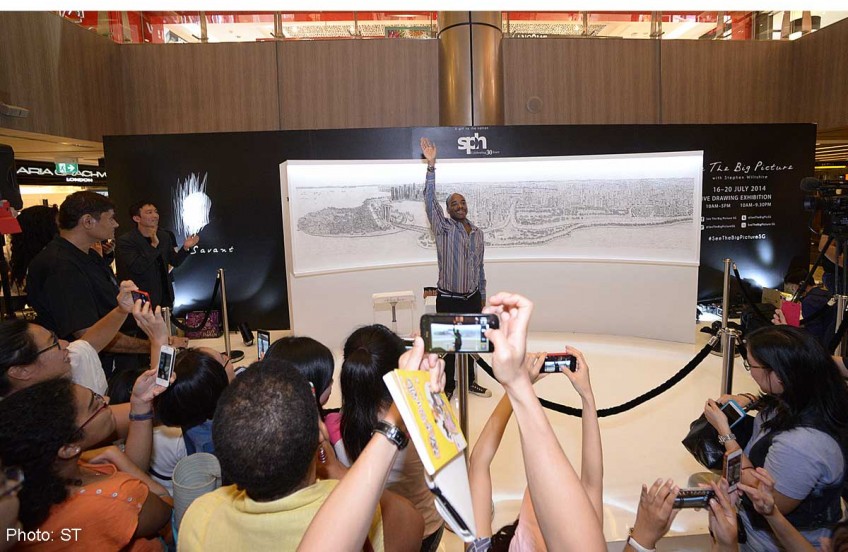 British artist Stephen Wiltshire with his completed sketch of Singapore at Paragon yesterday. Hundreds of people thronged the mall’s main atrium to catch a glimpse of him in action.

"Thank you very much for coming and appreciating my work," he told the hundreds of people who thronged the main atrium of Paragon mall in Orchard Road to catch a glimpse of him in action.

"Do the best you can and never stop," added Mr Wiltshire, 40, who was diagnosed with autism when he was three years old, and started drawing when he was five.

During his trip here with his sister Annette, 42, Mr Wiltshire toured historic Chinatown and took an hour-long helicopter ride over the Marina Bay area to memorise the skyline. His 10-day visit ends tomorrow.

He picked Marina Bay Sands as his favourite building, and it was the first thing he sketched when he began the drawing last Wednesday.

The hardest were the residential buildings on the right side of the drawing, he said last night.

He put the finishing touches on the 4m-by-1m canvas by shading in trees with a pencil, watched by Minister for Culture, Community and Youth Lawrence Wong, who also heads the SG50 programme office.

Mr Wiltshire was commissioned to create the artwork by SPH as part of the See The Big Picture project to mark its 30th anniversary this year.

The panorama will be displayed at the Urban Redevelopment Authority Singapore City Gallery until it is formally presented to President Tony Tan Keng Yam in September, as a gift to Singapore for the nation's 50th birthday next year.

Primary 6 pupil Joner Goh visited Paragon over the past two days hoping to meet Mr Wiltshire, after watching videos about him online months ago. He got what he wished for yesterday when the artist signed a card for him.

"I feel very satisfied and happy after seeing his work," said the 12-year-old, who takes art lessons at the Nanyang Academy of Fine Arts. "His drawing brings out the beauty of Singapore." joseow@sph.com.sg