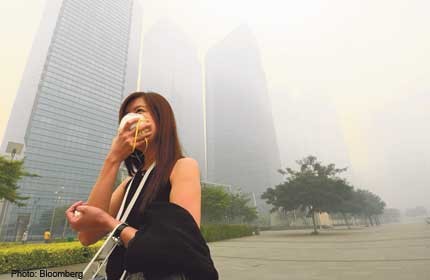 SINGAPORE - ASEAN environment ministers reached a compromise on the contentious haze problem, while holding out hopes that their leaders' summit in October would provide fresh breakthroughs.

Meeting in Kuala Lumpur on Wednesday, they agreed to recommend the adoption of a joint haze monitoring system (HMS) developed by Singapore, and the limited sharing of official maps to track down culprits who start forest fires.

The compromise came after resistance from Indonesia and Malaysia in making these official maps public, citing legal concerns. The adoption of the HMS awaits approval at the Asean Leaders' Summit, which will be held in Brunei in October.

"We didn't get everything that we wanted, but I think there is some progress. Setting the deadline of October 2013? to launch the HMS is a good starting point," Singapore's Environment and Water Resources Minister Vivian Balakrishnan told a joint press conference after the meeting ended.

"In the meantime, I think all the companies are put on notice that we're watching."

If adopted, the HMS will be used by Indonesia, Malaysia, Singapore, Brunei and Thailand.

The five countries, which are in the Asean sub-regional ministerial steering committee (MSC) on transboundary haze pollution, had brought forward their scheduled meeting by a month after the region suffered its worst episode of haze since 1997.

During the three-day session - described by some officials as intense - Singapore had pushed for public disclosure of official land- use and concession maps, to allow the public to exert pressure on errant companies or individuals.

Accurate and official maps, when used with satellite images of hot spots, also give the authorities evidence for enforcement action.

But the leaders eventually settled on sharing these concession maps between governments on a "case-by-case basis".

Indonesian Environment Minister Balthasar Kambuaya told reporters on Wednesday that his country had regulations on information and transparency, which dictate what officials can make public.

"As a government, we're not allowed to publish concession maps for the public," he said.

He later told The Straits Times that plantation companies would "feel compromised in terms of their competitiveness by releasing these data". He denied speculation that the Indonesian government was worried the companies may sue if the maps were inaccurate.

Malaysia's Natural Resources and Environment Minister G. Palanivel also said his country was "a bit strict" on public disclosure of concession maps, but did not elaborate.

He added that the issue was complicated by the fact that land issues come under the jurisdiction of state governments here, not the federal government.

At the meeting, Indonesia said it hopes to ratify the 2002 Asean Agreement on Transboundary Haze Pollution by early next year. The pact requires parties to prevent burning of forests, and to provide information and mutual help.

The ministers also agreed to renew a collaboration to promote sustainable farming and haze prediction in Jambi that lapsed in 2011.