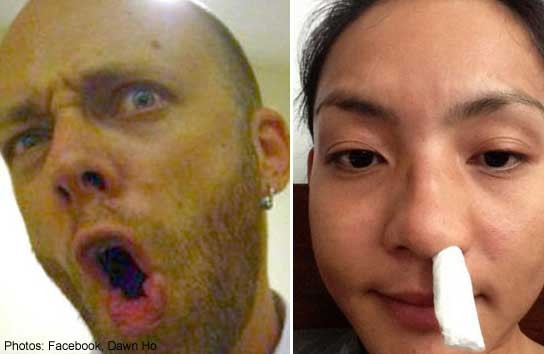 The Australian expatriate who who allegedly punched jazz singer Dawn Ho in the face during an altercation on Sentosa on Sunday (March 9) has resigned from his job, but his troubles are not over as the matter has been handed over to the police for investigations.

Mr Aaron Jeremiejczyk, who started work as a director of marketing at Tadcaster Hospitality about three months ago, is being investigated over the alleged attack that occurred at a taxi stand.

Ms Ho, who wrote about the incident on social media, said she took issue with Mr Jeremiejczyk after she saw him being "demeaning" and vulgar to a cabby, even banging the car hood in an "alcohol-induced rage" over the fare, reports The Straits Times.

"As I walked past him, I said, 'Hey man, what you're doing is not cool and you have no right to talk to people like that'," she recalled.

"I then walked off, and he diverted his rage towards me, calling me names, hurling abuse with vulgarities and following me continuously to my friend's car."

Ms Ho, 34, said she traded vulgarities with Mr Jeremiejczyk, who is believed to be 37, and the spat culminated in him reaching into her friend's car through an open window and allegedly punching her in the nose as she sat in the back seat.

"As soon as I felt the blood gushing out of my nose I said, 'Don't go anywhere, I'm calling the police'," said Ms Ho.

"He just replied, 'Why did you punch yourself?', with a smirk on his face."

According to a report in The New Paper, Sentosa Leisure Management's director of island operations Koh Piak Huat said frontline staff noticed the incident at about 9.20pm.

They alerted island security, who got to the scene within five minutes. He added that the matter has been handed over to the police for investigations.

Police confirmed the incident and said it has been classified as a case of voluntarily causing hurt. Investigations are ongoing.

Tadcaster Hospitality, which owns The Exchange, an Australian-themed bar and eatery in Asia Square, has suspended him after being made aware of a Facebook post by Ms Dawn Ho on the incident.

He tendered his resignation later that day, said managing director Tony Coughlan, noting that Mr Jeremiejczyk had been an employee for about three months and had no history of misbehaviour.