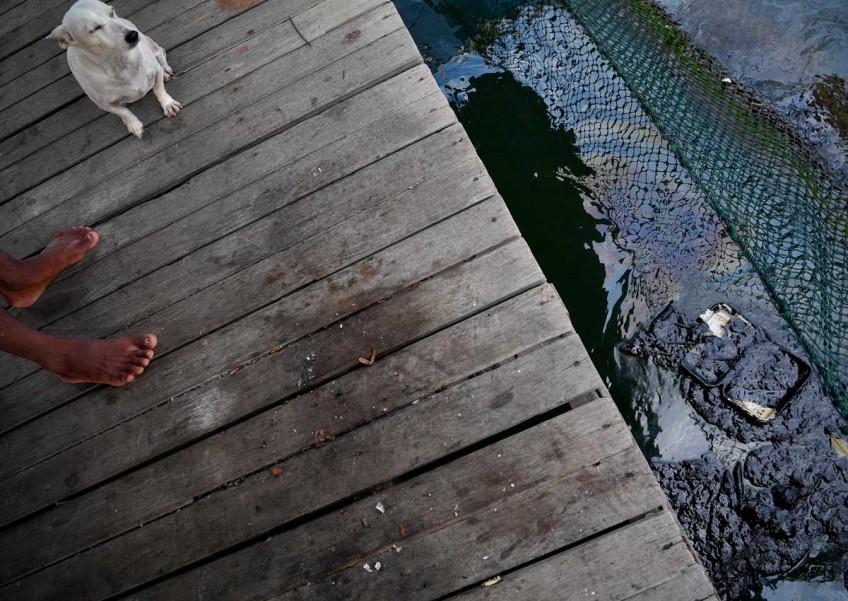 Crude oil in a pen at a fish farm on the outskirts of Pulau Ubin on 4 January 2017. All 12 fish farms in Singapore that were affected in January by an oil spill from Johor can now resume sale of their seafood, including fish, crustaceans and molluscs.
The Straits Times

All 12 fish farms in Singapore that were affected in January by an oil spill from Johor can now resume sale of their seafood, including fish, crustaceans and molluscs.

The Agri-Food and Veterinary Authority (AVA) said yesterday that clean-up operations at the farms along the East Johor Strait have been completed.

The AVA had earlier partially lifted the sales suspension for just fish but, by Tuesday, it gave the all-clear - two months after the oil spill first clogged Singapore's shores.

On Jan 3, two vessels collided in Johor waters and caused 300 tonnes of oil to spill into the East Johor Strait where the fish farms are.

AVA asked the farms to stop sales until food-safety evaluations were completed.

AVA took samples from fish farms there, including those not directly affected by the oil spill.

The samples underwent a combination of sensory and chemical analyses, to determine if the seafood was tainted with petroleum or if they were contaminated with chemicals that can be found in crude or industry oil.

Mr Timothy Ng, operations manager of 2 Jays, one of the affected farms, estimated that the sales suspension cost his farm $10,000. But he said he was glad that AVA helped with clean-up operations. "As for the stoppage of sales, I think it's okay, because I don't want to sell seafood that may be contaminated," he told The Straits Times.

Mr Raymond Sng, owner of another of the affected farms, Tiberias Harvest Farm, agreed. He said a prolonged interruption in supply could have badly affected restaurant customers, and online home consumers who pre-ordered fish for Chinese New Year.

But AVA acted on such feedback and a number of farms, including his, were allowed to resume operations earlier.

"We are grateful for AVA's responsiveness to farmers' feedback and needs, and also for the guidance and materials provided for protection and clean-up measures," said Mr Sng.