AVA looks into codes of animal welfare, which will help in prosecuting offences 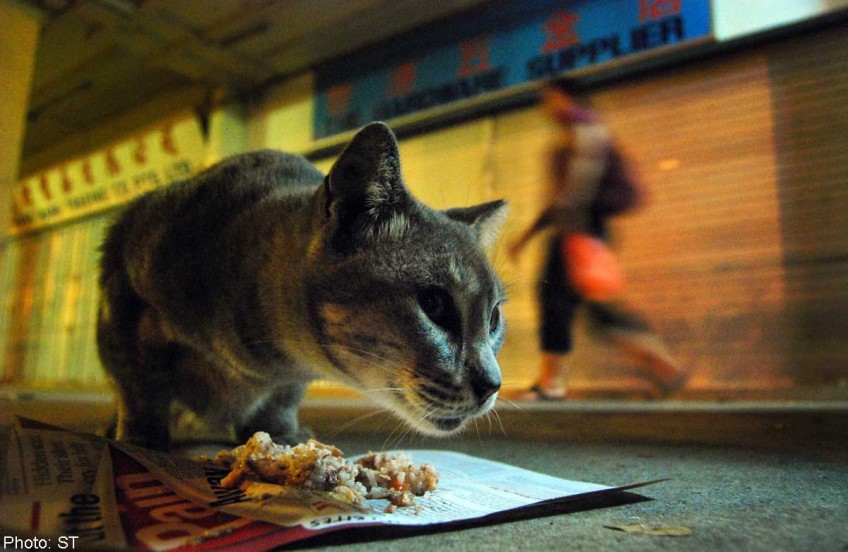 SINGAPORE - Codes of Animal Welfare have been submitted to the Agri-Food and Veterinary Authority of Singapore (AVA) for review.

The MSCC had asked the public to provide feedback for the codes of animal welfare earlier this year.

A very good morning to all of you.

I am pleased to be here today. First, I would like to thank the organizer, PETAS, for putting together yet another fruitful Responsible Pet Ownership event, with an admirable showcase of obedient and well groomed dogs As prominent players in the pet industry, their sharing of knowledge on important aspects of pet ownership such as proper grooming and training helps to spread the awareness of what it takes to be a good pet owner. This is important because as our society matures, we should become more conscious and aware about the welfare needs of our pets.

Indeed, there is much work going on that is aimed at improving the welfare of animals in Singapore. If you recall, the Animal Welfare Legislation Review Committee (AWLRC), which I chaired, put forward 24 recommendations to the Government in March 2013 to raise animal welfare standards in Singapore. These recommendations were subsequently accepted by the Ministry of National Development.

To-date, four AWLRC recommendations have been implemented. Two recommendations were effected by the Agri-Food and Veterinary Authority of Singapore (AVA) on 1 January 2014 in the form of two new pet retail licensing conditions - (i) the adoption of mandatory pre-sale screening; and (ii) an age limit for the purchase of dogs, cats and rabbits.

Arising from another AWLRC recommendation, the Multi-Stakeholder Collaboration Committee for Animal Welfare (MSCC) chaired by my colleague, Mr Alex Yam, MP for Chua Chu Kang GRC was established on 1 October 2013 to serve as a platform for stakeholders to share their views, build up mutual understanding on animal welfare, and to collaborate together in promoting animal welfare in Singapore. Similar to the composition of the AWLRC, the MSCC includes representatives from the animal welfare groups, the pet industry and hobbyist clubs, the veterinary profession, and the community. I am also continuing my efforts to help promote animal welfare as a member of this MSCC.

Amongst the MSCC's tasks is the formulation of Codes of Animal Welfare to help to set clear guidelines, for owners and pet businesses on how to meet the needs of their pets and/or animals under their charge to ensure their well-being. The formulation of these Codes is also one of the 24 recommendations made by the AWLRC last year.

The MSCC has been working tirelessly to formulate the Codes, which included lengthy discussions over the details of the Codes and conducting a one-month e-consultation exercise earlier this year to obtain feedback from the public. After the e-consultation was over, the MSCC had to go through over 2,000 comments from around 600 public respondents. After intensive debates on how to improve the Codes based on the feedback, around two-thirds of the comments were eventually incorporated into the Codes.

Finally, after 9 months of hard work, I am proud to announce, on behalf of the MSCC, that we have finally completed work on the Codes of Animal Welfare. The Codes will be presented to AVA today, for them to study and consider, subject to any adjustments or tweaks they might need to make to facilitate their use of the Codes. I would also like to use this opportunity to thank the public for contributing to the formulation of the Codes. This is a good example of public engagement and bottom-up initiative.

The Codes of Animal Welfare

The Codes, which consist of the Code of Animal Welfare for pet owners and the Code of Animal Welfare for the pet industry, are meant as a set of guidelines to educate and advise pet owners and pet businesses on how to take care of their pets and/or animals under their charge. The Codes were formulated because there was no clear agreed definition on what is deemed as good welfare standards. The MSCC thus had to start from scratch to establish that common ground through discussion, consultation and agreement from the various members who represent different stakeholder groups.

We decided to divide the Codes into two - one for pet owners and another for the pet industry - because we had to consider the varying circumstances and contexts for the two main groups. Nevertheless, both Codes include education information, guidelines for the basic care of animals and best practices on how to care for your animal with respect to shelter, comfort, food, water, exercise, and healthcare. For the pet industry, we have also established guidelines for certain pet businesses that are currently not regulated by AVA, such as pet grooming and boarding. In drafting the Codes, we were careful to ensure that they are not too prescriptive and onerous for pet owners and businesses.

We understand that a summary of the Codes will be made available on the AVA website for the moment, as the Codes are still subject to further study and consideration by AVA, and amendments if necessary. I am told by AVA that they will publicise the Codes in due course if they accept the Codes.

Besides the four AWLRC recommendations that I had earlier mentioned, including the release of the Codes, we are also taking action on a number of other AWLRC recommendations. Together with several of my MP colleagues, Mr Alex Yam, Mr Gan Thiam Poh, Mr Eugene Tong and Mr Vikram Nair, we will be tabling in Parliament in September 2014 a Private Member's Bill to amend the Animals and Birds Act to give effect to some of the recommendations made by the AWLRC. One of the proposals in this Bill is to empower AVA to issue or adopt animal welfare codes should the Bill be passed by Parliament and brought into operation.

Other Deliverables by MSCC

I am also pleased to announce that the MSCC has started work on the other AWLRC recommendation pertaining to the formulation and implementation of industry-led accreditation schemes for pet businesses, such as groomers, breeders and pet shops. PETAS informed me that it will partner e2i (Employment and Employability Institute) in developing training programmes with internationally trained professionals which will help groomers and obedience trainers to upgrade their skills. The MSCC will also be focusing on the development of community outreach and education programmes to promote greater responsibility among pet owners and to increase community awareness of animal welfare.

To conclude, the release of the Codes of Animal Welfare marks a new milestone in the animal welfare scene in Singapore. While there is still much to do, I am very glad that we are making significant progress towards enhancing animal welfare in Singapore. I urge everyone to do their part, in moving our society forward to become a better place for both people, and animals.

Lastly, I wish everyone an enjoyable and fruitful time at this event.