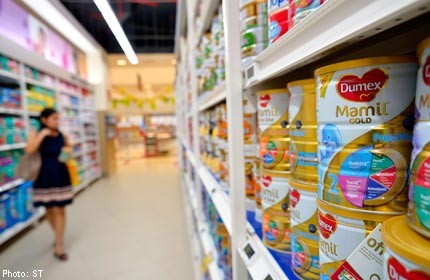 SINGAPORE - Singapore has stepped up checks and testing of infant milk powder in the wake of a precautionary product recall by Danone Dumex, the authorities told The Straits Times on Thursday.

More than 13,000 affected milk tins are being removed from retail shelves here and will be destroyed, said the food company.

An Agri-Food and Veterinary Authority (AVA) spokesman said the agency is working closely with Danone Dumex and will continue to monitor the situation.

Stepped-up checks have so far confirmed "the products have met our food safety standards and requirements", she said.

"Infant formula available in our retail market is safe for consumption," she stressed.

In babies, this causes problems such as constipation, general muscle weakness and poor feeding.

The Ministry of Health told The Straits Times it has not received any notifications of botulism cases in Singapore but hospitals with paediatric services have been alerted and are vigilant.

Ms W. L. Cheong, 26, whose nine-month-old boy is on Dumex's Mamil Gold, is sticking to it. "When I heard about the recall, I... quickly checked to see if the tin my son was drinking from was from the affected batch. It was, so I changed to another tin," said the housewife.

"But I don't think there is a need to be too paranoid. This is a precautionary recall and I'm actually grateful the company came out publicly and is taking the necessary steps."

On whether parents should expect more batches to be recalled, Danone Dumex's Singapore managing director Laurence Tournerie said: "No, this is the final round. We have not received further information from Fonterra."