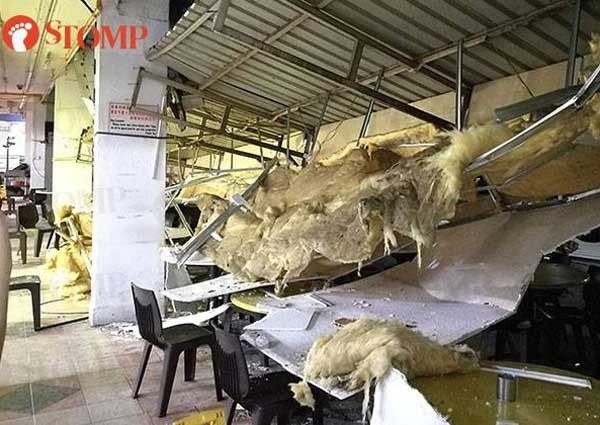 The awning of a coffeeshop at Jurong East came crashing down during a heavy downpour yesterday afternoon (Jun 28).

The incident happened at Choice@215, a coffeeshop at Block 215, Jurong East Street 21.

Passers-by confirmed that the incident happened at around 4pm.

Due to the heavy downpour, patrons who were seated outside had also moved into the coffeeshop, narrowly escaping the falling awning.

Stomp contributor Jonathan alerted Stomp to the incident and sent in some photos taken at the scene.

From the photos, the awning appeared to have been completely dislodged, along with a tin roof and ceiling fans, falling over some tables and chairs below.

The area was also littered with debris.

Stomp understands that no one was injured in the incident.