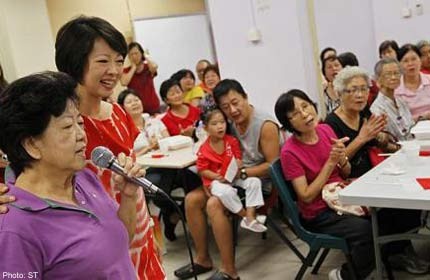 SINGAPORE - A breakfast club to help the elderly socialise was launched on Sunday in West Coast GRC.

Every Sunday morning, senior citizens in Ayer Rajah will gather at a void deck. Breakfast is served free, and there are activities such as karaoke sessions and even haircuts.

These gatherings help the elderly to interact with one another, said West Coast GRC MP Foo Mee Har, who launched the first sessionon Sunday.

"When I go around the neighbourhood, I feel being alone is the key issue for the elderly, not so much financial resources," she said, pointing out that one in four residents in Ayer Rajah is aged 50 and above, higher than the national average of one in five.

"This is like a club where we want to recruit as many of that age group as possible and bring them together as a community for mutual support."

Dubbed the Senior Friendship Circle, the morning meetings are held weekly at one of four locations in Pandan Gardens and Teban Gardens.

One of the roughly 200 senior citizens who attended yesterday's launch was 66-year-old James Guo, who has lived in Teban Gardens for three decades.

Said the retired teacher: "This brings old people out from their home into a community. As an old person, I wouldn't want to feel alone."

Madam Fong May Hah, 67, was another who attended.

"This can give seniors like us a chance to meet and chat about things like grandchildren. It's healthier for old people to have friends, instead of being cooped up at home," said the housewife, who lives with her husband and younger daughter.

"After a while, maybe we can go on holidays or outings with each other."