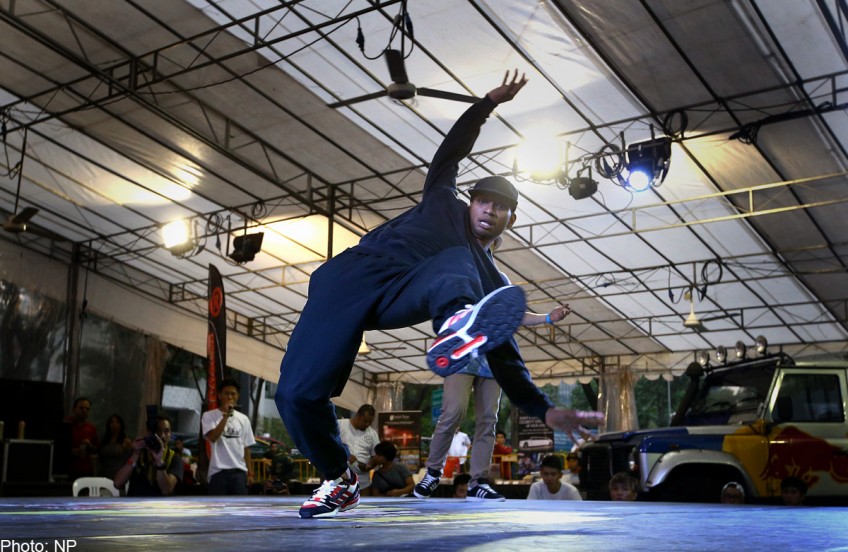 WINNER: Mr Sean Shagaran, 23, won the Red Bull BC One Singapore Finals on Friday. He will go on to represent Singapore in the Asia Pacific Finals in South Korea later this year.

The two men stare at each other with ferocious intensity.

They slowly circle the arena, never taking their eyes off the each other as onlookers watch - and egg them on.

Then, the music starts.

The pair immediately break into a fierce battle, one of nifty footwork and sheer athleticism, and trade gasp-inducing dance moves like flairs and head spins in front of a dazzled crowd.

Along with 14 other break dancers, they were dancing to win the Red Bull BC One Singapore Finals last Friday evening.

As dusk fell on the outdoor stage at *Scape, Mr Sean Shagaran, 23, emerged victorious after four rounds of one-on-one battles against competitors.

It was his second consecutive win, but a shocked Mr Shagaran told The New Paper that he had never set his sights on a title defence.

"I didn't expect to win again as everyone was a lot stronger this year.

"But it feels good to win."

Mr Shagaran's love affair with break dancing started eight years ago, when he was in secondary school.

The former Anglo-Chinese School (Barker Road) student said: "I saw some of my classmates break dancing and decided that I wanted to learn it."

He has not looked back since.

At least three times a week, Mr Shagaran trains with local dance crew Checkered Minds for three to four hours at their studio.

Although he admitted that pursuing break dancing is tough, he has no plans to throw in the towel any time soon.

"I won't be able to survive without break dancing," he said. "It's in my blood."

Even a painful ligament tear in his left knee five years ago did little to extinguish his burning passion.

"I twisted my knee during routine training and the doctor told me I couldn't dance for a whole year.

"I was devastated, but I didn't think of giving up.

"It only reaffirmed my love for break dancing even more."

He credited his parents, both former dancers, with being a pillar of support.

"Before I left home, they wished me good luck and told me to do my best.

"I'm glad I did and can go back and tell them that I won."

Victory for Mr Shagaran was extra sweet because judging his routine was B-boy True Colours, one of his favourite local break dancers.

The Red Bull BC One All-Stars member told TNP: "This is my first time judging in Singapore and the standard here is very high.

"But Sean won because of his smooth footwork and original personal style."

His competitor in the final round, Mr Leonard Ng, 22, also a full-time national serviceman, conceded that Mr Shagaran performed better that evening.

Mr Ng said: "My footwork was quite sloppy and could have been cleaner.

"But Sean performed at his best so I have no regrets losing to him."

As the winner, Mr Shagaran will represent Singapore in the Red Bull BC One Asia Pacific Finals in South Korea this year.

It will be his second time doing so.

"The level of competition is going to be crazy, but this time, I want to go at least one step further."

This article was first published on Mar 23, 2015.
Get The New Paper for more stories.