Baby? No, it's my ring tone 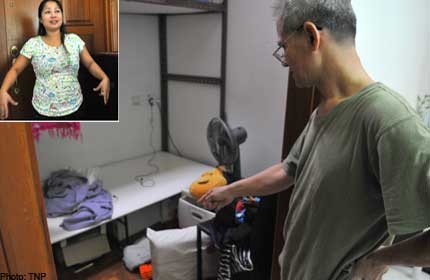 (Above) Mr Gao Quan Wu pointing to where the police found the bloodied bedsheet, which the maid hid under her bed. (Inset) Ms Dorena Nitre showing how big Ms Riney was when she first met her.

SINGAPORE - He was watching television with his five-year-old grandson last Thursday when he heard a soft, wailing sound like that of a baby crying from the rear balcony of their apartment.

A puzzled Mr Gao Quan Wu, 66, asked his grandson to find out what the sound was. Their maid was at the balcony then.

The boy returned and told him the baby's cry was a ring tone from the maid's mobile phone.

Two days later, Mr Gao read a newspaper report about a baby girl who had been found abandoned at Block 203, Serangoon Central, more than a kilometre from their Lorong Chuan condominium.

When he saw the picture of the baby, which was released by the police, he became suspicious. The light blue cloth used to wrap the baby was strangely familiar.

"The cloth stood out to me straightaway," Mr Gao told The New Paper in Mandarin on Wednesday. "My grandson had been using it since he was small, until it became all tattered."

He started connecting the dots and urged his son-in-law to call the police. He said the police arrived at around noon the next day and questioned their 28-year-old Indonesian maid, known only as Riney.

"She denied everything at first. But she became speechless when they found pictures of the baby in her mobile phone," Mr Gao said.

"She seemed scared because she knew she was in trouble. She didn't even finish her food."

He said the police also found a blood-stained bedsheet hidden under her bed.

The police said the maid is assisting in investigations.

Mr Gao said that it didn't occur to him that Ms Riney was pregnant, so he believed her claim that the sound of a baby crying was just one of her phone's ring tones.

"I didn't question it at all because I had no reason to suspect it was a real baby."

He said the sound could not have come from his other grandson, who is a year old, as he was out with his parents at the time.

The balcony where the sound came from is used to store laundry and is separated from the living room by the kitchen, where Ms Riney usually spent her time.

"At around 10am, she left the unit with a bundle. I noticed she was well-dressed and I remember wondering why she hadn't left earlier, as it was her day off," Mr Gao said.

That day, Aug 8, was a public holiday as it was Hari Raya Puasa.

The police said the baby was found by a passer-by at 2pm that day. The police statement said that she was believed to be about a week old and was wearing a white jumper and a diaper.

When Ms Riney came home at around 8pm, Mr Gao said that she seemed happy.

He said that in the days before he heard the crying sound, his family had not noticed anything out of the ordinary, apart from her eating habits.

"She started to eat less. I thought she was sick, so I asked my son-in-law to ask her about it. She said that she was fasting."

But a Filipino maid from a neighbouring unit noticed a change in her size.

"When I first saw her, she was very fat," Ms Dorena Nitre, 37, said. "Then in the past few days, she suddenly became very thin. I asked her, 'What happened to you? Are you eating less?'. She only smiled."

Mr Gao said Ms Riney, whom he described as quiet but hard-working, started working for the family in March, which meant she would have been pregnant by then.

He said his daughter had taken Ms Riney for a medical check-up in a hospital in June. She would have been seven months pregnant. But the doctor did not mention that she was pregnant, he said.

"That's why we had no reason to suspect. We had no idea."

It is not known if Ms Riney had worked for other employers in Singapore before being employed by Mr Gao's family.