'Be mentally prepared to deal with terror attacks' 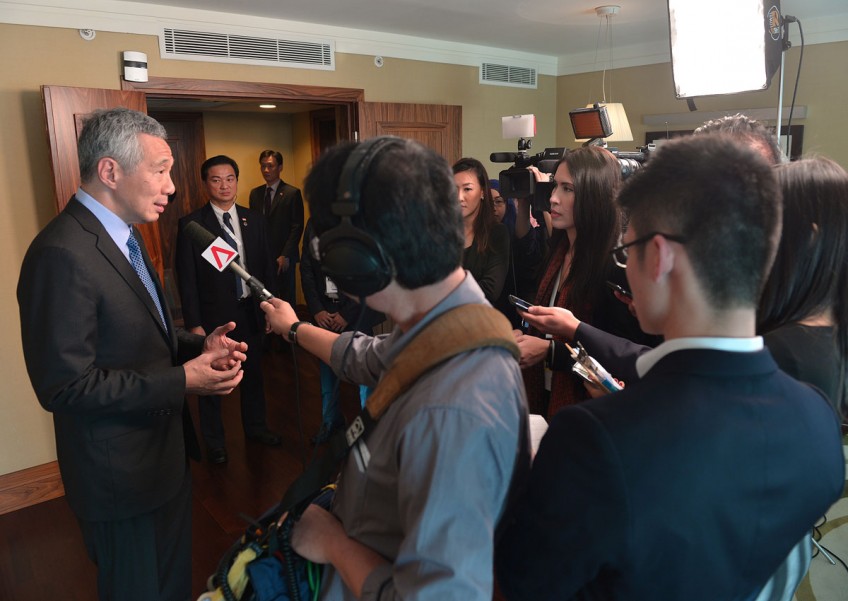 Prime Minister Lee Hsien Loong speaking to Singapore journalists in his hotel suite at the conclusion of the G-20 Summit in Antalya, Turkey, on 16 November 2015.
The Straits Times

ANTALYA, Turkey - Prime Minister Lee Hsien Loong yesterday warned Singaporeans that the violence wrought on Paris last Friday could happen in Singapore and they have to be psychologically prepared for it.

"We are in the middle of a region (where) ISIS is active," he said, referring to terror group Islamic State in Iraq and Syria.

Some 700 South-east Asians have gone to the Middle East to join ISIS, including some Singaporeans.

Mr Lee made the point at a press conference with Singapore reporters at the end of the Group of 20 (G-20) Summit here, where terrorism was a key topic, including tackling the growing flow of foreign fighters into the ranks of ISIS.

The actions of ISIS, he added, were a "completely perverted and wrong interpretation" of Islam.

"It is not true Islam, in the way the vast majority of believers, of Muslims, interpret the religion," Mr Lee said.

But ISIS members declare themselves Muslims even though they know very little of Islam, he noted.

So in a way, to say they had nothing to do with religion was also an "oversimplification".

"The reality is the majority of Muslims do not subscribe to this. Religious leaders in Singapore, particularly Muslim religious leaders, have come out very clearly and firmly to condemn ISIS and this perverted interpretation and inhumane practice," he added.

Mr Lee was also asked how Singapore would gauge whether it was successful in the war against ISIS.

He cited three lines of action.

First, Singapore has to ensure its people understand the issue and maintain cohesion and trust. "There is a clear stand taken that this is... against Islam, against Singapore's interest, against social harmony."

Second, Singapore tries its best to ensure that nothing untoward happens in the country, as one failure would mean a disastrous incident.

Third, it is helping in the fight against ISIS by joining the global coalition to fight the terror group. "We are already being targeted and we have to stand up and participate and help in the effort to tackle the problem," he added.

Mr Lee said global leaders agree that the problem is urgent, and there is a substantial degree of co-operation going on among countries that is often not talked about, as it involves intelligence and security matters.

Singapore is not a member of the G-20, but was one of six countries invited as an observer this year.

The latest summit had covered issues such as development and sustainable growth, terrorism, taxes, and the global economy.

Given the significance of these issues to Singapore, Mr Lee said: "It's very valuable to us to be able to be at the table, participating in the discussion, contributing our ideas and having some influence on what people think."

Singapore, which was invited to five of the last six G-20 summits, will again attend the summit in Hangzhou, China, next year.

Mr Lee also estimated that the Trans-Pacific Partnership (TPP) agreement, concluded recently by 12 countries, including the United States, Australia and Japan, could save Singapore about $1 billion a year in tariffs.

Although Singapore has bilateral free trade agreements (FTA) with all but two countries in the TPP, it will still stand to benefit from an expanded Rules of Origin - the set of criteria that decides whether a product qualifies for FTA concessions.

"This means that when we're selling to America, you don't have to have (a product) all made in Singapore. You can have some parts from Japan or Australia, and then add it all up," Mr Lee said.