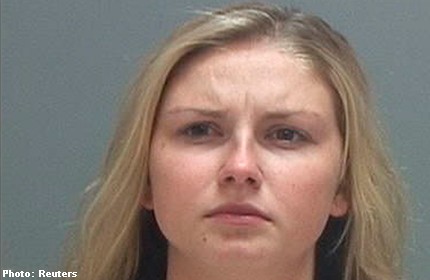 A Utah beauty queen accused along with three friends of throwing homemade bombs in a Salt Lake City suburb resigned her Miss Riverton title on Tuesday, according to a statement posted on the US city's website.

In the statement, city officials said they had been informed by the director of the Miss Riverton Pageant that 18-year-old Kendra Gill (pic) had resigned her position effective that day, Reuters reported.

"Prior to the alleged incidents of Aug 2, 2013, Kendra had done a good job during the short time she served as Miss Riverton," the statement said.

Miss Gill, crowned Miss Riverton in June, and three other 18-year-olds were arrested earlier this month following a bomb-throwing spree that began the evening of Aug 2 and was aimed at people and property in Riverton neighbourhoods.

Nobody was injured in the incident.

When questioned by police, one of the teens said he had spent the evening "pranking with fireworks with friends", according to booking documents.

They were charged last Friday with four counts each of criminal bomb possession.

"The reason we charged them is obviously, what they possessed was indeed explosives, and we're alleging they were throwing them near homes and at people, and therefore, had the potential to cause a great deal of harm," he added.

Criminal bomb possession is punishable by one to 15 years in prison.

All four suspects in the case are due to make their first court appearance together on Aug 26 in Salt Lake City. Each has been released on US$50,000 (S$63,600) bond.

All four acknowledged they were tossing bombs powered by a toilet bowl cleaner reacting with aluminium foil on sidewalks, front yards or in streets "to scare some of their friends", Unified Fire Authority investigator Steve Bowen said in a court affidavit filed last Friday.

Miss Gill's attorney, Mr Walter Bugden, could not be reached for comment on Tuesday evening and officials with pageant did not respond to a request for comment, Reuters reported.