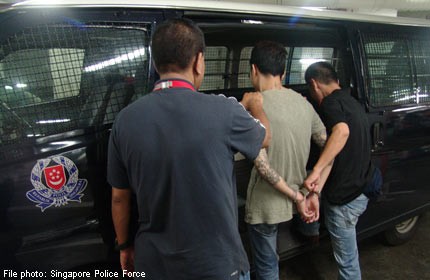 SINGAPORE - Overall crime has experienced its sharpest fall in recent times, according to the police's half- year report out on Friday.

Cases in the first six months of this year were down 6.3 per cent from the same period last year.

It is the biggest drop in the last four years, keeping Singapore on track to better last year's annual crime rate of 581 cases for every 100,000 people - a 29-year low.

Loan shark harassment cases, a bugbear of the police, fell by nearly 10 per cent, after a get- tough policy and a national education campaign.

Lucky draw phone scams were more than halved, housebreaking at residences was down by more than 30 per cent, molestation incidents on trains and buses fell by nearly 11 per cent, while bicycle thefts dropped nearly 8 per cent.

One worrying trend, however, was the rising number of extortion cases, up nearly 23 per cent.

Most of the 54 cases this year occurred online, and involved male victims who were persuaded by female suspects based overseas into undressing and performing indecent acts in front of a webcam.

Crimes in which people suffered serious physical hurt also rose by more than 14 per cent, with the police sharing their concern over the increase of such cases at construction sites. Among construction workers, such incidents jumped to 17 from just four in the first half of last year.

Mr Alvin Yeo, a member of the Government Parliamentary Committee for Home Affairs and Law, said this is "something that has to be watched".

Construction companies told The Straits Times that they have rules of conduct for their workers. "We also ban drinking at the dormitory, because fights may break out," said Mr Or Toh Wat, the group managing director of construction firm OKP Holding. The police also said they will continue to clamp down on illegal moneylending activities.

While the number of harassment cases fell, 101 more people were arrested in the first half of this year compared with the same period last year - an increase of 10 per cent.

Last November, the police and the National Crime Prevention Council rolled out a nationwide awareness campaign telling people to "Stay away from Ah Longs" or face "a hell of a life".

Earlier this month, a High Court judge said that a loan shark runner who vandalised homes of debtors' neighbours could have as much as three months extra added to a typical one-year jail sentence for such offences.

Criminal Investigation Department deputy director Florence Chua on Friday reiterated the police's zero tolerance towards all forms of loan shark harassment. "No effort will be spared to nab them to face the full consequences of their misdeeds," she said.

Mr Yeo, who is an MP for Chua Chu Kang GRC, said that the police and the community should continue to work together to ensure the crime rate keeps falling.

"It is good that overall crime is down," he said. "It is a tribute to the good work of the police."