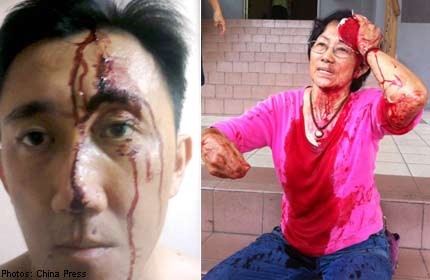 MALAYSIA - The attack was allegedly all about joss paper.

An elderly woman and her son ended up being badly injured after they were allegedly attacked by his wife.

Both the elderly woman and her son suffered head injuries so bad that they had to be stitched up, reported Malaysia's The Star.

It all started when Madam Lim Kae Poy, 67, went to her 31-year-old daughter-in-law's condominium in Bandar Baru Klang in Selangor last week to collect schoolbooks belonging to her grandson.

"As soon as I entered, she accused me of stealing joss paper from the living room and threw a metal can at me, but I dodged it," she told reporters.

"She then hit me on the head with a metal spatula."

Madam Lim managed to get away and fled to the police station to lodge a report, but policemen took her to the Tengku Ampuan Rahimah Hospital because she was bleeding profusely.

She needed five stitches on her head.

Her 37-year-old son, Mr Liew Pang, also known as Mr Low Pang, had earlier tried to break up the fight, but was also allegedly hit on the head by his wife.

As his mother fled, he remained in the condominium to restrain his wife. Mr Liew later sought treatment at a clinic and needed five stitches for his head wound.

He told reporters that when he went to lodge a police report at a police station the following day, he was instead detained for four days.

The police told him his wife had reported earlier that he had beaten her up.

North Klang Assistant Commissioner Shukor Sulong confirmed that police reports have been lodged by all three.

Meanwhile, a primary school teacher who was allegedly attacked by her mother-in-law and her sister last May told a Butterworth court that she was stabbed numerous times with a 10cm knife.

Ms Julie Yeoh Kar Tin, 43, said she was shocked when her mother-in-law, Lee Wei Mei, 64, stabbed her in her bedroom at a flat in Seberang Jaya, Penang.

She also told the court that Lee's younger sister, Lee Wei Chee, 61, poured boiling water from a kettle onto her back. The sisters are both charged with injuring Ms Yeoh.

Asked by Deputy Public Prosecutor Suhaimi Ibrahim how many times she was stabbed, Ms Yeoh replied that she could not remember, adding that Lee Wei Mei continued to stab her despite her shouts for help. She also said that Lee Wei Chee had earlier locked the bedroom door from the outside.

Said Ms Yeoh: "I tried to open the door many times but failed. Suddenly, Wei Chee opened the door and poured boiling water on me. Wei Mei then told Wei Chee in Cantonese to hit my head with the kettle.

She started hitting me with the kettle a few times on the head and then I felt dizzy."

The trial resumes on July 22.