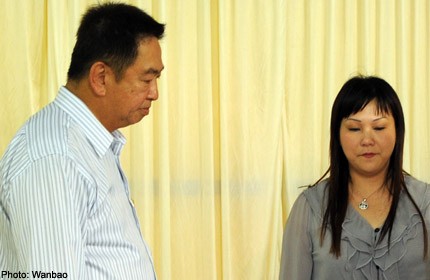 SINGAPORE - Their divorce was finalised in June. But for undertaker couple Roland Tay, 67, and Sally Ho, 47, it is not the end just yet. He is now suing for the assets accumulated. We take a look at the papers filed in court.

Who is Roland Tay?

Undertaker Roland Tay is known to have handled funeral arrangements of some high-profile cases.

The 67-year-old took care of the arrangements for the funeral of ms Liu Hong mei, a 22-year-old factory worker from China, whose body parts were washed up on the banks of Kallang River in 2005.

He also handled the funeral for eight-year-old China national Huang Na, whose badly decomposed body was found in 2004.

But what is little known is that court documents show he owns or used to own several high-end properties, including apartments at The Sail at marina Bay and Leedon Heights.

His ex-wife, madam Sally Ho, is disputing this in legal proceedings over the division of assets.

According to the court papers, these properties are estimated to be a total of about $20 million, a wealth that belies his humble start in life.

Born the fourth of 10 children to a hawker couple, Mr Tay was given away as a baby to a couple who operated a coffee shop in Lavender Street. He dropped out after finishing his primary education to help at the coffee shop.

He was in his 20s when he took over the coffee shop after his adoptive parents died of stomach cancer.

He later rented it out to start a business that provided religious articles and funeral items to Singapore Casket, transport services, and tentage.

Eight years later, he started a business providing funeral services. In 1986, he shut the coffee shop and used the premises to operate the now defunct Casket Palace.

Entering the death trade, he once said, was only natural and it had fed him for about 40 years.

His first wife bore him a son and a daughter who are now 43 and 42.

His divorce with his third wife, madam Ho, was finalised in June. They have no children.

When Madam Sally Ho promised she would take care of him for the rest of his life, Mr Roland Tay picked her as his nominee for his funeral services business.

At the same time, he allowed her to use the money from his businesses to buy properties under her own name, make investments and make deposits into her personal account.

At no time did he give consent or agree that she had proprietary interest in the Funds Pool, Joint Account and her own personal account.

Mr Tay said Madam Ho had no knowledge of the funeral service trade, yet he asked a Mr Lee Boon Beng to withdraw as proprietor of Hindu Casket in 1997 in favour of her.

He also named her as the person taking over Tong Aik in 1998 and Direct Singapore Funeral Services & Embalming in 2002.

In all three instances, no document or agreement was signed to effect the terms of appointment or removal, but Mr Tay was "the controlling mind" behind the businesses.

Mr Tay said he helped and paid for properties bought and sold by Madam Ho either under her own name or in the name of others, valued at about $20 million.

He said by virtue of his ownership of the Funds Pool, Joint Account and Madam Ho's personal account, he was "the true owner" of her interest in the assets and properties.

The house was used as their matrimonial home.

She employed a security guard to keep him out.

She also tried to evict Mr Tay from 127, Lavender Street, which he is now using as an office.

5. Show Me The Money

Madam Ho needed to "render proper accounts of all the moneys" in the Funds Pool, Joint Account and her own personal account for the purpose of tracing; and for the sum to be returned at an interest of 5.33 per cent a year from the date of writh.

It was only when the parties developed closer ties and on Mr Tay's frequent expressing of "great fears" of no one to look after him in his old age that Madam Ho promised to take care of him.

She also managed to save $300,000 after having worked part-time from the age of nine and full-time since she was 15. She was using her own personal monies to make various investments.

If Mr Tay and his businesses did extend monies to her, they were salaries and reimbursements due to her on professional and commercial basis.

She also never made investments for or on behalf of Mr Tay.

To the best of her knowledge, Mr Lee Boon Beng "voluntarily transferred" Hindu Casket to her because his mother's dying wish was that he "ceased commerce in the funeral industry".

She also said that when she took over the business, it was almost always operating at a monthly loss and that she pumped $130,000 of her own funds into it to help clear its debts.

Refuting that Mr Tay was "the controlling mind" behind the businesses, Madam Ho said he could not have been as he was in jail when she had proprietorship of the businesses.

Madam Ho said that one of the properties contested for, a flat at Block 113, Ang Mo Kio Avenue 4, was a gift in 2000 for the fact that she went to jail at Mr Tay's request (on account of her "taking a penal liability for a criminal offence or offences committed" by him). It was sold in 2005 at a loss.

Other properties, including 125 and 127, Lavender Street, were acquired using Madam Ho's own funds.

Madam Ho bought the terrace house at Park Villas Rise in Yio Chu Kang using her own money after leaving 127, Lavender Street with her children in 2005.

When the couple reconciled and moved in together, Mr Tay told everyone that he bought the place and Madam Ho did not refute this as she did not want him to "lose face", when he "contributed nothing towards its purchase or upkeep".

5. Show Me The Money

When it came to his own monetary affairs, Madam Ho said that Mr Tay could, at all times, access whatever documents, including bank statements and accounting records, to do as he deemed fit.

Shares (in private and public companies) and other investments in Madam Ho's name and those of her nominees, traceable to the moneys from the funds pool and joint account

[[nid:50100]]
SUBSCRIBE TO OUR NEWSLETTER
Your daily good stuff - AsiaOne stories delivered straight to your inbox