Big struggle to haul kids and pram up crowded bus 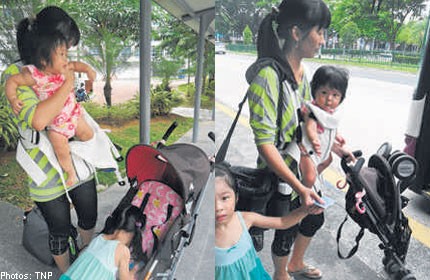 SINGAPORE - How hard can it be for a parent with a baby in arms to travel on public transport?

A local mother who has lived in Sweden for four years volunteered to take her two young daughters and this reporter around Singapore to show how hard it can be.

Madam Summer Goh, who runs Ahappymum.com, accompanied her husband to Sweden when he had his military training.

Her eldest daughter, Angel, now four, was born there.

The stay-at-home mum, 30, says: "After three years of taking public transport where space was allocated for prams and nearly everywhere was baby-friendly, Singapore was a big change."

For this test, Madam Goh had her six-month-old daughter, Ariel, in a pram, while she held onto her older daughter. A baby carrier was strapped to her chest, while a bulky baby bag hung from the stroller's handles.

"You just have to get used to it, I actually have a bigger pram which we used in Sweden, but it's just not possible to bring it out in Singapore," she says.

"It's too big to go on a bus. In Sweden, there's also space for two or three prams on each bus. But here, you have to fold it up."

She says there have been many times when she has had to wait for the next bus because it was just impossible for her to board with two children, a pram and bag.

"And when people see you have a pram, they normally try to squeeze onto the bus before you, so you don't have it as easy."

At the bus stop, she wasted no time in getting ready. She unbuckled her younger daughter and put her into a baby carrier, all the while keeping an eye on the bus and her eldest daughter.

Shifting the baby bag from the pram to her shoulder, she held Angel with one hand and bent forward to fold up the pram.

Thankfully, the bus arrived shortly after the pram was folded.

Still holding onto Angel, she struggled to lift the folded-up pram into the bus.

Getting on board the bus was relatively easy. Finding a place to secure the pram was harder.

The petite woman had to lift the pram onto a platform while trying not to hit anyone. By the time she finished securing the pram, seated Angel and made sure Ariel was content with being strapped into the carrier, she was sweating.

"I do get a lot of stares from people, but they rarely offer any help," she says.

She adds that every time she boards a bus, the driver insists she fold up the pram - immediately.

"When I have time to fold it up before the bus arrives, I'll definitely do it.

"Once, the bus arrived before I could fold it up, so I boarded the bus first.

"The driver just kept saying: 'Can you fold it up faster?' "At that time, I was trying to make sure both my daughters were safe before I folded up the pram, but the driver just told me to fold it up."

She understands that it's their job, but wishes they were more understanding.

"For a mother, the first priority will definitely be your child's safety."

She recalls another time when Ariel was asleep in the pram, but the driver insisted that she had to fold it up as well.

"I just think that the drivers can make concessions, especially when the bus isn't crowded. I understand if it's during peak hour and it's crowded, but if the bus is empty, I don't see why we have to fold it up."

Madam Goh says it's not just the folding up that can be a headache.

Ariel can get restless and may refuse to be put into a baby carrier after she is lifted from the pram. Angel will definitely be affected and two crying children make for a very unhappy bus ride.

"It's not easy to look after so many things at once. "Keeping an eye out for my pram, trying to soothe both daughters, making sure that the baby bag is still with me - it's very hard."