Bike-sharing services put to the test 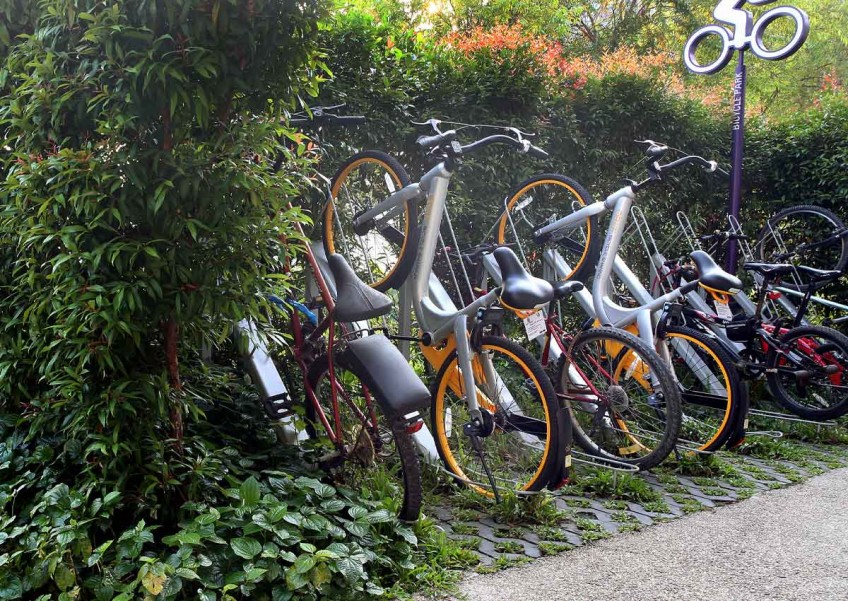 Row of bike-share bicycles from oBike, ofo and or Mobike.
The Straits Times

Two days after the latest bike-sharing platform, Mobike, launched here, the Government announced it would scrap its plan for a national bike-sharing scheme.

The Land Transport Authority, which had already attracted tenders for the scheme, said on Friday it has "reassessed" its plan as the three private companies, Mobike, oBike and ofo, are looking to roll out "many thousands" of bicycles over the next two years.

The companies said they are actively working with partners so that their bikes can be parked at public racks, after the East Coast-Fengshan Town Council recently objected to bikes being parked at its public racks for "rental business".

There are teething problems - Mobike's GPS led our reporters on a wild goose chase for bikes around the island, and some ofo bikes we found could not be unlocked using the app.

How do these services compare with one another? We find out. - ISABELLE LIEW

The service asks for a $49 deposit, but students get a discounted rate of $19.

Payment was simple, with the app accepting either PayPal and credit or debit cards.

Bikes are widely available at designated bike parking areas islandwide and I easily located them through the in-app GPS.

oBike gives users the option of reserving a bike for 10 minutes. All I had to do to begin cycling was to scan the QR code.

oBike seems more suited for recreational use on flat paths. The bike is rather large and heavy, so cycling on narrow or crowded paths is a challenge.

The lack of gears on the bike makes it near impossible to ride up slopes, and not all bikes I saw were equipped with baskets and lights.

Returning the bike was a matter of parking it at a designated public bike parking area and turning the bike lock on the back wheel to let the app know that the session is over.

oBike also employs a credit system, where demerit points are given to users who break such rules. A bad credit score affects the cost of your ride.

Promotions are available - referring a friend gives both of you a $3 ride coupon.

The software is relatively seamless, but the ride itself is lacking.

The oBike's clumsy design makes for an uncomfortable ride up slopes, something even the attractive price-point cannot overcome. I would opt for a traditional bike with gears from a bike-rental shop.

Unlike its competitors, ofo does not have a GPS system. I had to visit several MRT stations before I found an ofo bike.

The gear chains were oiled but not greasy, and the bike seat had ample space for me.

But the front handle and adjustable seat of the bike shifted whenever the bike experienced a significant bump.

ofo bikes offer three gear changes as opposed to the usual single gear bikes their competitors offer. Do not get your hopes up too high because these bikes are not built for speed.

The return of the bike was simple. ofo's return policy states that the return can happen anywhere and anytime, as long as the bike is not obstructing pathways and remains visible.

You end the trip by pressing a button on the app, and manually lock the wheel using a lever.

The return was far more pleasant than the rental.

The pricing for ofo will be $0.50 per trip, but the rides are free for now.

ofo bikes are wallet-friendly, and they provide users with a decent riding experience.

But it was so difficult to find one that it wasn't worth the time and effort.

The Mobike app, available on Apple and Android devices, is easy to download.

There is a refundable $49 deposit and the Mobike Wallet can be topped up using a credit or debit card.

Locating the bike is meant to be easy using the app, which also allows you to reserve one for up to 15 minutes. But as we reported last week, eight out of 10 times, the bikes could not be found at their shown locations.

The Mobikes are light and the attached basket is handy. The built-in headlights and reflectors are helpful for late-night rides. But the current crop of Mobikes do not allow for the seat to be adjusted and they do not have gears.

Mobikes can be returned at any public bike parking areas, such as those around MRT stations and HDB void decks. When a latch on the lock near the wheel is pulled, the app recognises that the ride is completed.

Mobike charges $1 for every 30 minutes of use. Each time I top up, I get a number of free rides (as long as the ride is under 30 minutes), encouraging me to continue biking.

Lighter and faster than its competitors here, Mobike has the potential to become the better option once the app instructions and GPS are fully optimised for Singapore use and usage charges become more flexible.

This article was first published on Mar 27, 2017.
Get The New Paper for more stories.