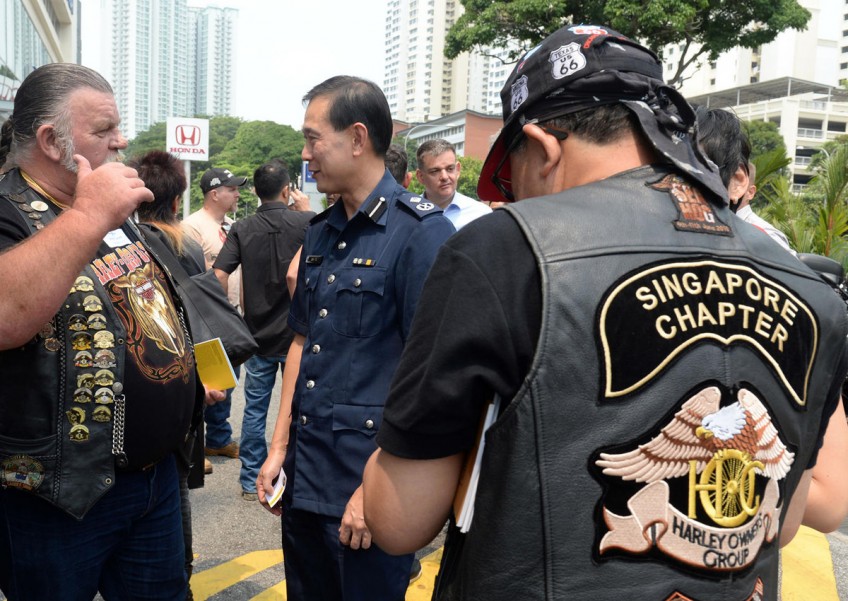 The Traffic Police (TP) will continue to come down hard on reckless behaviour on the road in a bid to reduce motorcyclist deaths, TP Commander Sam Tee said yesterday.

Speaking at a dialogue attended by about 80 motorcyclists and members of road-user groups, he said riders remain over-represented in road deaths even as the total number of road fatalities has dropped.

There are about 145,000 motorcycles on the roads here - about one in six vehicles - but they account for almost half of all road deaths. Last year, motorcyclists and their pillions accounted for 74 of the 155 road deaths. In 2013, they comprised 73 out of the 160 road deaths, according to TP statistics.

"We are very concerned about bikers because they remain one of the most vulnerable road users," said Assistant Commissioner of Police (ACP) Tee, adding that the top three causes of accidents were failing to keep a lookout, to keep proper control, and to give way to traffic with the right-of-way.

He said the TP would come down hard in areas with "more propensity to cause hurt". He cited the example of a reckless motorcyclist on a BMW machine, who posted a YouTube video of himself speeding from Stevens Road to the Bukit Timah Expressway.

The video went viral on social media but the motorcyclist was tracked down and arrested.

"He was surprised that we found him... When we asked him why he did it, he said it was fun," said the TP chief. This type of behaviour, he added, endangered all road users.

Such enforcement will be part of a multi-pronged approach involving educating riders and engaging road-user groups here, he said.

At the dialogue - organised by the TP and Singapore Road Safety Council - several areas of concern were raised, including how to reach out to Malaysian riders and inculcate safe riding habits.

An average of 54,000 foreign vehicles entered Singapore each day last year, of which about 70 per cent were motorcycles, according to Land Transport Authority data.

Civil servant Mohamed Salleh, 65, said: "Once these bikers leave immigration, many ride recklessly, weaving in and out of traffic." He suggested the police give these riders reminders and warnings if they are spotted riding in an unsafe manner.

Motorcyclist Ian Tan, 39, said many new motorcyclists become "hell riders" after they remove their probation plates because they lack role models on the roads.

Mr Khaw Gim Leong, vice-president of operations at ComfortDelGro Driving Centre, said more experienced riders could be invited to speak at driving schools and share their experiences with new learners, and become their role models.

ACP Tee said the feedback gathered at the dialogue will be used to see how the roads can be made safer. "I think to a very large extent, the consensus is that the onus (for safety) should not fall just on the bikers, but on all road users," he said.