The lorry is seen accelerating towards the bikers, forcing them to move out of its way.

A motorcyclist who was filmed kicking the side mirror of a lorry at East Coast Road on Monday was apparently upset with the driver for going too slowly.

The driver's employer, who runs a wood trading company, told The New Paper yesterday that the motorcyclist had honked at the lorry from behind because it was moving slowly.

He claimed that the biker then overtook the lorry and stopped his motorcycle in front of it.

"My employee told me the motorcyclist was agitated and shouting loudly," said the employer, who declined to be named. "He told my employee to get out. When he refused, the man opened the door and tried to pull him out."

He claimed the biker became more aggressive when his driver refused to budge.

The 1.40pm incident near Roxy Square was captured by a car's rear camera.

Posted on Roads.sg, the video shows a man, believed to be the biker, kicking the door of the lorry before breaking its side mirror with a high kick. 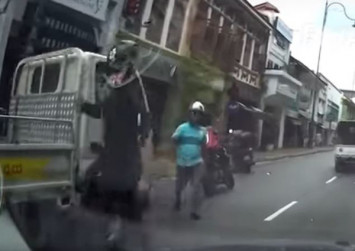 Another motorcyclist, wearing what looks like a Deliveroo T-shirt, is seen trying to calm the situation.

The lorry then accelerates towards the bikers, forcing them to get out of its way.

The lorry stops after knocking over one motorcycle.

The employer said that it was an accident as his driver was trying to go around the motorcycles parked in front of the lorry.

One of the motorbikes had a Foodpanda bag on it.

A part-time worker in a nearby shop, who wanted to be known only as Leon, said the commotion caused a traffic jam for a short while.

She told TNP yesterday that she was picking up an order when she heard "a lot of noise".

"When I turned around, I saw a man shouting very loudly and behaving aggressively. People were stopping to watch,"she said.

A Deliveroo spokesman said it was aware of the incident.

"We require all riders to abide by local rules and regulations. The safety of riders and other road users is a top priority for Deliveroo," he said.

Foodpanda did not respond by press time yesterday.