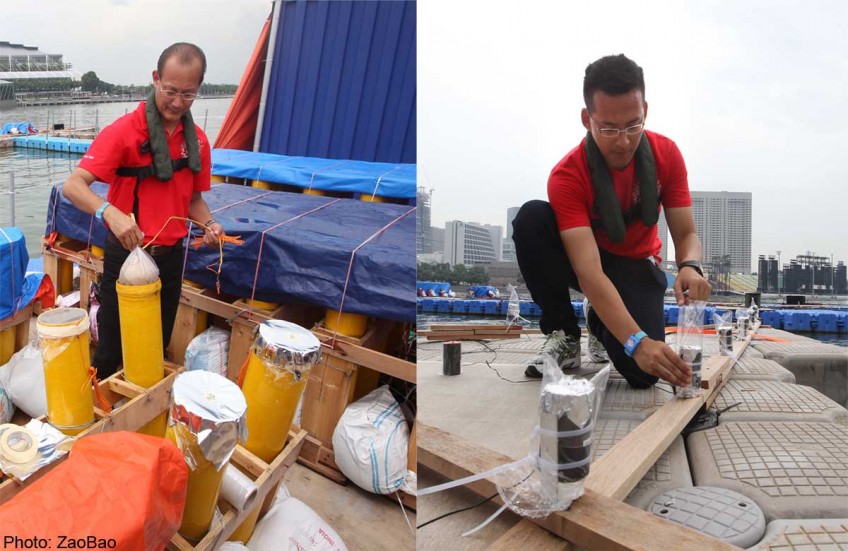 When Military Expert 6 (ME6) Cheong Heng Wan, 46, was a boy, he enjoyed watching his neighbour play with fireworks. "I could only watch, as my family was too poor to afford fireworks," he recalled.

Today, as the chairman of this year's National Day Parade (NDP) fireworks committee, he will be playing with fireworks that will turn others green - and red and gold - with envy.

"I hope others enjoy it while I play with the fireworks this time," said ME6 Cheong, who is head of the Explosives Safety Branch of the Singapore Armed Forces Ammunition Command.

But ensuring a successful execution of such a grand spectacle is not all fun.

Add the dangerous nature of explosives, and the challenges multiply.

But ME6 Cheong joked: "My job is simple; I just have to bear all the responsibility."

His easy demeanour disguises the difficult nature of his job. The fireworks committee started working last September, as soon as NDP 2013 ended.

The committee was tasked with coming up with fresh and dynamic additions to the pyrotechnics for this year's NDP.

An idea to present a "birthday cake" to the nation was conceived in January.

Flares would be lined in the shape of a crescent moon and five stars in the waters.

Measuring 51m by 60m, they would be lit for 40 seconds during the National Anthem.

There will also be three new fireworks displays brightening the night skies.

Preparations have to be thorough, and start four days before each show. Any lapse in the preparation process could affect safety.

Even then, mishaps can still happen during the show.

ME6 Cheong assumes his position in the command and control room once the show begins.

Each cue to fire is given by ME6 Cheong, who is also responsible for disabling any time-coded cue should there be safety concerns.

A team of 50 will be deployed during the actual show, including dedicated spotters whose job is to report infringements within the 200m safety radius around the fireworks barge to ME6 Cheong.

But all the planning and hard work is worth it, he said.

"When we heard the children go 'wah' at the first show, we all were very happy and felt shiok inside," he added.