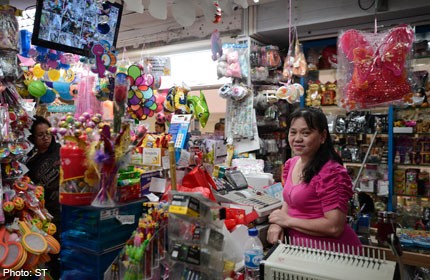 SINGAPORE - Retail stores and food outlets operating on the second storey of Rivervale Plaza were hit by an extended blackout that lasted for at least 15 hours.

The owner of Sengkang Books and Stationery, Ms Chan Siew Eng, 50, said that there was a series of power failures before the blackout hit shops at around 9.30pm last Friday.

"It has caused us to lose business. It's very serious because we all need to make money," she said.

She added that her shop has to make at least $1,000 a day in order to cover rental costs. The blackout affected her business and she earned only about $200 as of last night. Power resumed only Saturday afternoon.

He said his company will be liaising with the mall's management regarding the incident.

The building's management could not be reached for comment last night.

For two years, the mall - Sengkang's oldest - was in a shambles.

This after it was hit by a series of construction woes where shoppers endured dust and congested passageways, while the losses mounted for tenants.

A $10 million upgrade was delayed after initial contractor Technobuilt went bust. The state of the mall even became a hot-button issue in January's Punggol East by-election.