The blind woman who made PM choke back tears 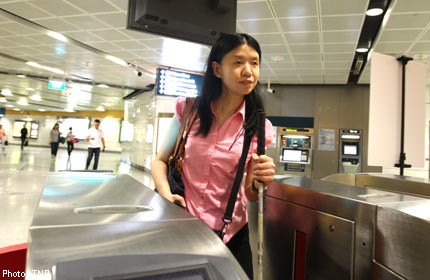 She takes the Circle Line train from Bishan to one-north to get to work.

SINGAPORE - When Prime Minister Lee Hsien Loong began talking about Dr Yeo Sze Ling at the National Day Rally on Sunday, she could not see his facial expressions as he held back tears.

But she could hear it in his voice.

Although she knew that she was going to be mentioned and looked on calmly as the camera zoomed in, she was feeling a torrent of emotions.

"I was a bit stunned," the 36-year-old said with a laugh. She had attended the rally with her younger sister, a 26-year-old nurse.

During his speech, PM Lee praised Dr Yeo, who comes from a humble background, for her success as well as her volunteering efforts.

At the start of this month, she was invited to the rally as well as the dialogue with Mr Lee at the Lasalle College of the Arts on Thursday night.

Almost a week has passed since the rally, and the shy research scientist admits that the attention has been overwhelming.

Dr Yeo has received many congratulatory messages from her friends and family.

"People who know me, and people who don't, have been approaching me."

She went blind at 4

Dr Yeo has little memory of what the world looks like.

Diagnosed with glaucoma when she was still in kindergarten, she went thorough several surgeries but they were unsuccessful.

Glaucoma is a condition that increases pressure within the eyeball, causing sight loss.

Dr Yeo cannot see shapes or colours, and can only sense brightness or darkness.

Dressed in a simple pink top and black skirt, she said that her mother and sister are her fashion advisers.

"I trust my sister's taste. I have to," she said with a laugh.

"My mother buys my clothes too. She buys what she thinks will look nice on me," she said.

Dr Yeo did a straw poll once, asking friends - some of whom were blind - a question: Would you rather be blind from birth or at a later age?

While the people who were blessed with sight usually chose the former because it is less traumatic, those who were blind overwhelmingly chose to be blind later in life.

And it was for a practical reason.

"We feel that it would be easier for us to visualise many things if we had seen them before," said Dr Yeo. For example, it was hard for her to use a computer at first, because she had no idea how a screen looked like.

When asked what she wants to see the most if she could regain her sight, she said without hesitation that it was her family.

She has an older brother and a younger sister.

Her parents are both retired.

"Instead of some beautiful place, I would rather see my family members," said Dr Yeo, who no longer has an impression of what they look like.

Dr Yeo did her undergraduate and master's degree in science at the National University of Singapore (NUS), topping her science faculty in 2001. But she hasn't always been a high-flier.

In fact, she scored an aggregate of 222 for her PSLE.

"I got an A star for maths, but my science grade really pulled me down. There were so many diagrams asking me to identify plants and animals," she recalled with a laugh.

She completed her primary school education at the Singapore School for the Visually Handicapped, now known as Lighthouse School, before attending Bedok South Secondary School and Serangoon Junior College.

Dr Yeo received an Agency for Science, Technology and Research (A*Star) scholarship to do a doctorate degree in mathematics in NUS and graduated in 2006. She currently works at A*Star and is an adjunct assistant professor at Nanyang Technological University.

How she 'sees' at work

The petite woman takes the public bus and train to work from her four-room flat in Bishan to her office at Fusionopolis at one-north.

Every morning, her mother accompanies her to the bus stop, which is a five-minute walk away from her block.

Dr Yeo walks with a cane, and she is usually helped by a stranger or the train staff to get to her destination.

"I can find my own way, but it would take longer. Compared to 20 years ago, people are much more aware and will offer help," she said.

Dr Yeo was offered a seat on the bus, as well as the priority seat on the train, when we followed her on her way to work on Friday.

When she reaches her office on the 19th floor at the Institute for Infocomm Research at about 8.10am, she is usually the first person in.

She jokes that the best part about being blind is not having to turn on the monitor, she told us with a laugh.

She uses a special software called Jaws, which reads out text.

To the untrained ear, the sound from her computer may seem like garble, but it is actually the text on her screen read aloud quickly. The software costs about $2,000.

Dr Yeo uses the software to "read" everything, from news articles to complicated mathematical formulas in journals.

Dr Yeo used to rely on phone calls for communication, but she now sends messages with her iPhone, which can read her message aloud.

"It's really quite amazing," she said as she demonstrated how she uses her iPhone 4, which is decorated in a furry case.

Dr Yeo, who's single, admits she is a homebody.

She volunteers at the Society for the Physically Disabled and also mentors youths who are visually handicapped, occasionally helping them with maths.

"I've been blessed with many opportunities, and I'm glad to be able to share that it's not the end of the world just because you are in certain circumstances," she said.

She also enjoys reading biographies and grew up "watching" Channel 8 dramas with her family.

When asked if she knows Zoe Tay and Fann Wong, she replied "Of course, of course" with a smile.

"It doesn't bother me if they are pretty or handsome, although some of my visually-handicapped friends do (care). We would hear from other people (about how they look) and imagine it for ourselves," she quipped.

Dr Yeo doesn't feel like she has missed out in life.

"Since I was young, I've met many people who have all sorts of handicaps.

If I really had to compare, there are many people who are worse off.

"So I prefer to be positive. It's something I had to learn to be," she said.