Body to lie in state after solemn journey 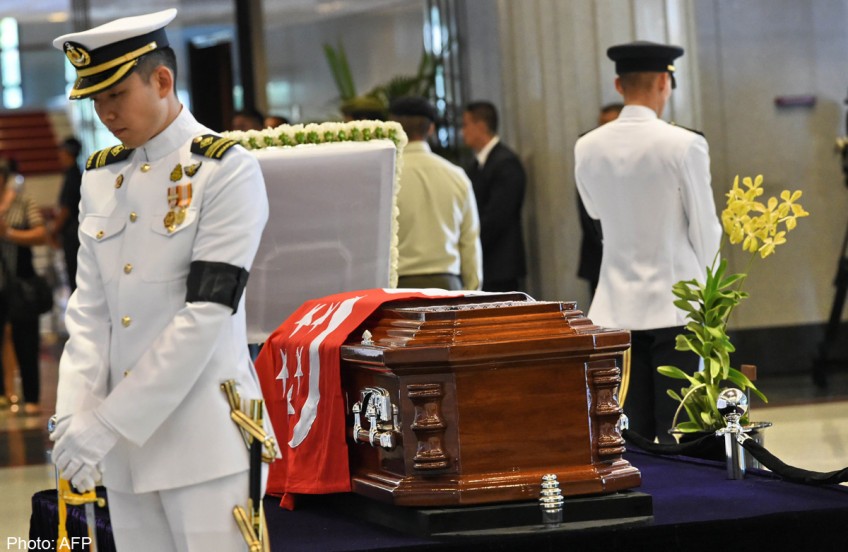 The casket of Singapore's former Prime Minister Lee Kuan Yew lies in state at Parliament House for public viewing ahead of his funeral.

On the one hand there will be ceremony and gestures that represent the highest state honour accorded a leader. On the other, doors will open for ordinary people to pay their respects.

The journey starts this morning with a ceremonial gun carriage conveying Mr Lee's body from the Istana to Parliament House, where it will lie in state until Saturday.

At 9am, the coffin bearer party of eight Army, Navy, Air Force and Police Force officers will march into Sri Temasek, where the private wake had been held.

The national flag will be draped over Mr Lee's coffin - the highest of state honours.

The casket will then be placed in a glass case upon a platform sitting on the ceremonial gun carriage.

As the Singapore Armed Forces Band plays Beethoven Funeral March No.1, the family - led by Prime Minister Lee Hsien Loong - will walk with the gun carriage from Sri Temasek for about 70m.

They will then head separately to Parliament House, while the gun carriage carries on past an English garden with yellow flame trees, towards the main building of the Istana.

There, President Tony Tan Keng Yam and Emeritus Senior Minister Goh Chok Tong will be waiting to offer their respects. A bagpiper from the Singapore Gurkha Contingent will play Auld Lang Syne.

Then, the gun carriage will leave the Istana and start its 2km journey to Parliament House.

It will travel along parts of Orchard Road, Bras Basah Road and North Bridge Road. These stretches will be closed to traffic from 8.45am to 9.30am.

Motorists can expect traffic delays along affected roads, said the Traffic Police in a statement.

At Parliament House, the coffin will be received by the Chief of Defence Force Lieutenant-General Ng Chee Meng, Commissioner of Police Hoong Wee Teck, Speaker of Parliament Halimah Yacob, PM Lee and the rest of the family.

There, the first of many Vigil Guards will be mounted. In this tradition, which is a mark of respect, an officer stands at each corner of the casket, head bowed and facing away. They are led by a senior officer who stands at the head of the casket, facing it.

President Tan and his wife will arrive to pay their respects. Over the next few days, friends and former colleagues of the late Mr Lee will also hold vigil.

People can pay their respects from 10am to 8pm daily, till Saturday.

[[nid:183386]]
SUBSCRIBE TO OUR NEWSLETTER
Your daily good stuff - AsiaOne stories delivered straight to your inbox