Bound for posterity: Portraits of neighbourhoods 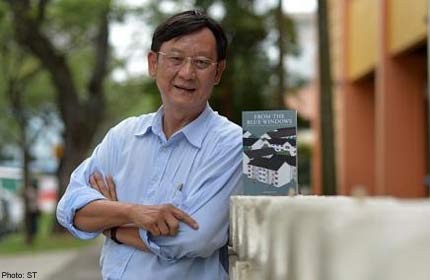 Mrr Tan, who spent 10 years putting together his book on Queenstown in the 1960s and 1970s, says: "There's no going back to this era and it's good for younger people to know about life back then."

SINGAPORE - A growing wave of nostalgia is sweeping across Singapore as more residents put together books about their beloved neighbourhoods.

At least three such titles have been published this year, ranging from recollections of the blue glass-louvred windows in 1960s Queenstown to watercolour sketches of Bedok, Toa Payoh and Tiong Bahru.

For engineering consultant Tan Kok Yang, 59, it was his first time writing a book.

Dr Tan spent 10 years compiling his memories and photographs for From The Blue Windows: Recollections Of Life In Queenstown, Singapore, In The 1960s And 1970s.

The book, which was published in April by NUS Press, cost him $4,000 to produce. He successfully applied for a National Arts Council grant, which covered half the cost, and paid the rest himself.

"There's no going back to this era and it's good for younger people to know about life back then," said Dr Tan, who spent 18 years in Queenstown during his childhood. He lives in Toh Tuck Road near Bukit Batok estate.

Another series involved a tie-up between a commercial publisher and an informal group, Urban Sketchers Singapore.

Publisher Epigram Books conceived the We Love... series, which has so far covered Bedok, Toa Payoh and Tiong Bahru. A fourth, on Queenstown, is about to be released.

"We wanted to reinforce the idea of a real neighbourhood through drawings, text and various methods," said its chief executive officer Edmund Wee.

Each title has watercolour paintings of the respective neighbourhoods done by the urban sketchers, who visit the area to paint their surroundings. In return, they receive complimentary copies of the books.

"It's a win-win situation as their sketches make it into a book and they get more publicity for their work," said Mr Wee.

Urban Sketchers Singapore founder, Madam Tia Boon Sim, agreed. "I felt honoured to be able to share with people our sketches of these neighbourhoods," said the 58-year-old.

"It is our little contribution to the country."

While the majority of the books are written by Singaporeans, American writer Stephen Black penned I Ate Tiong Bahru, which was published in May.

"I wrote this book as the Tiong Bahru I know is disappearing, as a result of increasing gentrification and the fact that many of the long-term residents are passing on," said Mr Black, 35. He frequently visited the area's famous market at 4.30am to write about the historic estate's early morning buzz.

The writers and publishers are unfazed by the prospect that their works may not be commercially viable.

Mr Wee, who said his series has not yet sold enough to break even, said: "We intend to continue, as we have the conviction that neighbourhoods are important for all Singaporeans."

Added Dr Tan: "If you do something you like, it is not too difficult. It gives me a sense of personal satisfaction to be living the past again."