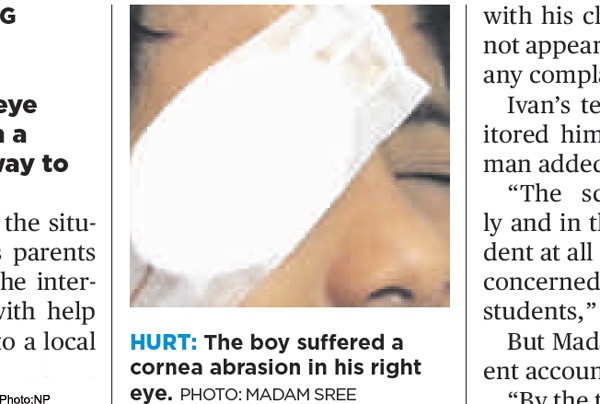 The boy injured his eye during a scuffle with a friend while on his way to school in the bus. Unhappy over the way the situation was handled, his parents then took him out of the international school, and with help of their MP, got him into a local school instead.

But because of the switch, Ivan (not his real name), who was in Primary Two at the international school, had to go back to Primary One in September. But the boy doesn't mind. Nor do his parents, who have heard of the rigour of the public school system here.

The couple have another child, aged 1½ years old. Both are Singapore permanent residents and have been here for eight years.

Ivan's mother, who wanted to be known only as Madam Sree, 33, a senior business analyst, said her son was anxious to get back to school after the incident.

"My son was very affected when he did not have a school. He kept asking me every day if we had found a school. We called about 25 schools.

"We are so grateful that the Ministry of Education allocated him a school," she said. She claimed that her child's injury - he suffered a cornea abrasion in his right eye - would have not been as serious if the school had informed them of the incident, which happened in July.

She alleged that the school took him on a field trip despite him saying he was in pain. The school, Global Indian International School (Balestier), is disputing both claims. A spokesman said the boy was given immediate attention by teachers and the school nurse. He was allowed to continue

with his classes because he did not appear to be in pain or make any complaints. Ivan's teacher had also monitored him closely, the spokesman added.

"The school acted properly and in the interest of the student at all times. We are equally concerned for the welfare of our students," the spokesman said. But Madam Sree gave a different account of what happened.

"By the time my son got home in the evening, he was in great pain. Our helper called us immediately. "We took him to the accident and emergency department and the doctor asked us why we didn't send him for treatment earlier," she said.

Ivan was immediately sent to an eye specialist. The boy, who used to have perfect eyesight, suffered blurry vision for a while. Madam Sree claimed that following the incident, the school took her son to the sick bay and applied some eye drops.

She said the medical bills for her son have added up to more than $1,000 in the past two months. She does not know what the final bill will be because the treatment is ongoing.

She took more than a month's leave to stay home and care for her son as he required eye dressing and padding. The stress took a toll on her. Madam Sree said she suffered a blackout and was hospitalised for a day.

Ivan is recovering now. His last check-up was a week ago. Besides the physical pain, the boy initially felt self-conscious because of his eye patch and stayed at home instead of going out to play.

But being back in school has raised his spirits. He said: "I am happy I have a school now. I'm happy that I can go to school."