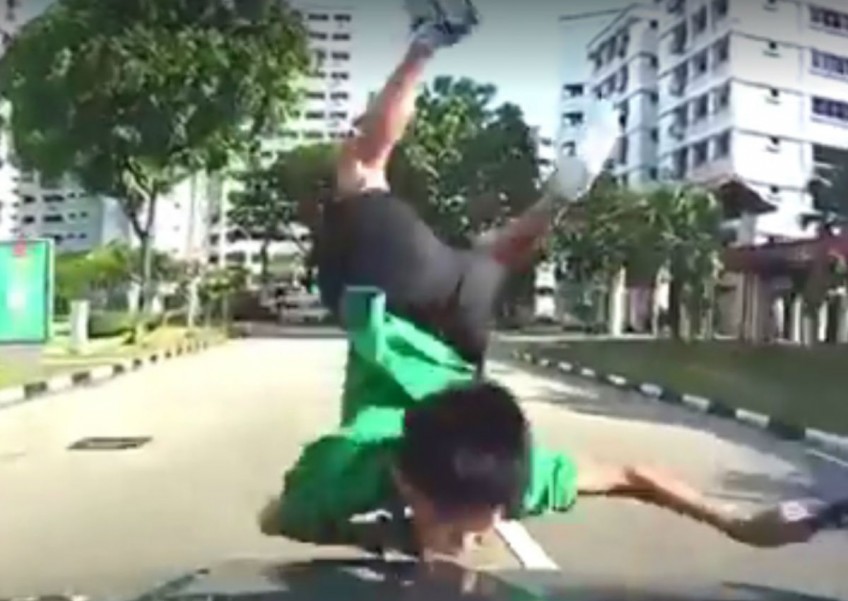 SINGAPORE - In his haste to cross the road, a young boy nearly lost his life by running in front of an oncoming car at Jurong West Street 81, and ended up learning his lesson on road safety the hard way.

The unidentified boy is lucky to be alive, probably because the car was not travelling at high speed at the time.

Footage from the driver's dashboard camera was uploaded online recently, and while the exact date of the incident is unknown, the video has garnered over 435,000 views since Facebook user Suzy Adorabella Lyliana shared it on Tuesday (July 12).

At the start of the video, the boy, dressed in a green tee shirt and knee-length shorts, can be seen dashing across a two-way road in an HDB estate.

In less than a second, he collides with the oncoming car and is tossed into the air. He lands a short distance away from the car, while his spectacles and one of his shoes end up metres away from him.

Sitting up, the boy is conscious but seems to be in shock. After a few seconds, he reaches for his bag and appears to have difficulty standing up. He then kneels on the road helplessly as passers-by approach him to offer help.

With their help, the boy gets up on his two feet and slowly limps towards the sidewalk.

Netizens who have seen the video have mostly expressed shock, with many pointing out how reckless the boy had been.

One Facebook user, Au Kah Kay, said: "Fortunately the car was equipped with a (dashboard) camera which proved conclusively that the child was 100 per cent at fault. Otherwise, the driver could have been unfairly penalised".

Many others pointed out the young children - and pedestrians in general - should be educated on road safety.

However, some netizens also criticised the driver for not rendering assistance immediately.

A Facebook user by the name of Vincent Ong said: " Yes, obviously not the driver's fault; though I seriously wonder why he/ she would not get out of the car to help the boy".